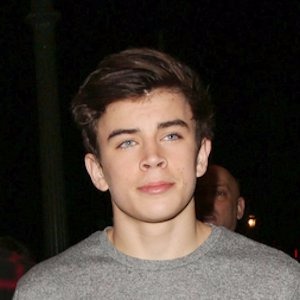 Hayes Grier is a famous internet personality who is currently associated with the video sharing platform called Vine. He is popularly known as a vine star. Besides vine, he is also famous in social networking sites such as Twitter, Instagram, and Facebook. The whopping number of followers he has on his social media vividly shows how famous this guy is in the world of teenagers. Just 16 now, Hayes is in the hearts of many girls around the world.

Hayes Grier, an American-born kid, is growing up physically and mentally. He already looks pretty mature for a 16 years old boy.

Hayes Grier must be doing his high school somewhere in his hometown New York City. Growing up with three siblings – Nash Grier, Will Grier, and Skylynn Elizabeth Floyd – has always been fun for this amazingly famous teenager.

Hayes Grier has been into the world of Vines for quite long now. His brother Nash is also a vine star. Probably, Hayes learned it all from his brother. Hayes’ sister Skylynn has appeared on his vines several times. Grier has numerous fans for his vine videos.

In 2014, Hayes came out very famous in the United States. He was invited in the famous MAGCON (Meet and Greet Convention) where he got to meet several famous people in industries such as Hollywood, singing, and dancing. Hayes has a greatly famous friend – the name is Shawn Mendes, the singer of Billboard hit Stitches.

Likewise, in the same year 2014, Hayes competed as a celebrity contestant in the 21st Dancing with the Stars. He had a lot of fun dancing and going out with Emma Slater. As the couple couldn’t climb the stairs after the 7th week, they were dismissed with the crown of the 8th position. However, seeing his incessant hard work, Creative Arts Agency signed Hayes to be one of the contestants in the upcoming show in 2015.

Grier was born on June 8, 2000. The names of his parents are Chad Grier and Elizabeth Grier-Floyd. Grier’s parents have been very supportive of the career of their children.

Grier was rumored to be going out with his dance partner Emma Slater. However, the buzz wasn’t confirmed by either of the parties.

In November 2016, Hayes is set to reveal his first novel named Hollywood Days with Hayes. He was awarded Teen Choice Award for Choice Web Star: Male.