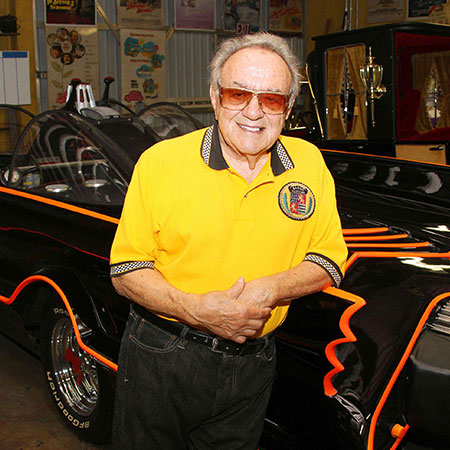 George Barris was known throughout the customization world as the ‘Original King of Kustomizers.’

We would like to take this time to look back into his custom car collection or rather his creations.

The Batmobile, his glorious creation, which started off as a 1955 Ford Lincoln Futura was specially designed for the 1966 TV show, Batman.

It weighs around 5500 pounds and has completely hard formed steel body, which is powered by a 429 Ford Full Race engine.

George bought the Lincoln for $250,000, and after its transformation into Batmobile, he kept the car in his personal collection.

23 KITT cars were built to use on the set of TV series ‘Knight Rider’ and all except 5 were destroyed at the end of the series.

George built the convertible and super-pursuit KITTs, which were used in the fourth and final season of ‘Knight Rider.’

Hollywood customizer Dean Jeffries rebuilt the 1966 Chrysler Imperial at the cost of $50,000 for the TV series ‘Green Hornet.’

The Black Beauty was designed and built by Jeffries and sent to George for some final touches.

It was featured in the American sitcom ‘The Munsters’ as it appeared in over twenty episodes as the family car.

It was built with Jahn’s high compression pistons, 10 Stromberg carburetors, an Isky cam and a 289 cu.in Ford V8 bored out to 425 cubic inches.

Jalopy was built for the character, Jethro played by Max Baer in the series, The Beverly Hillbillies.

Max believed his character needed an automobile which had more style and speed, so producer Paul Henning called George for the task.

At the time of his death, George Harris had the net worth of approximately $10 Million.