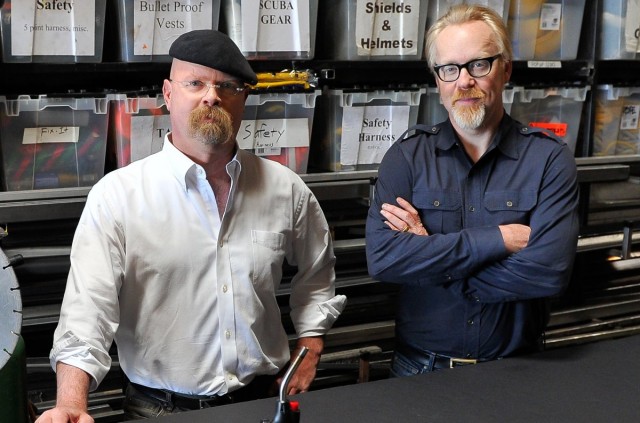 ‘Mythbusters’ is an Australian-American science entertainment TV program, which premiered on Discovery channel on January 23, 2003.

The show was initially hosted by Adam Savage and Jamie Hyneman until it’s resurrection by Science in 2016 with new hosts.

During the show’s sixth season, Grant, Tory and Kari tried to perform the act at a standard shooting range.

But, none of them could bend the bullet even the slightest, so the team brought a robot that could swing the bullet.

Even with the gun being swung by a robot, the bullet flew in a straight path, thus busting the myth.

Walking vs Running in Rain

It’s popular belief that walking in the rain will get less wet than running. The team tried to debunk the myth in episode 1 to no avail.

When they retried the experiment in actual rain, it was conclusively proven that the running test subject got less wet than the walking test subject.

In the 2004 season, they tested whether an ordinary playing card had the potential of killing a person when thrown at the right speed.

Even with a card throwing machine firing the playing card at the speed of 155 mph, it only led to a minor cut on Jamie’s body.

Goldfish has a memory span of 3 seconds

In an episode entitled ‘Sinking Titanic,’ Jamie trained his goldfish to recognize color patterns and complete an underwater course.

A month later, the goldfish remembered what Jamie had taught and easily completed the underwater course.

The toilet seat in the dirtiest place in a bathroom

Many objects that people touch every day are full of germs, from cash to kitchen sponges but a toilet seat might be cleaner.

When Adam tested this myth out of curiosity, the toilet seat was proved cleaner than any other surfaces tested.