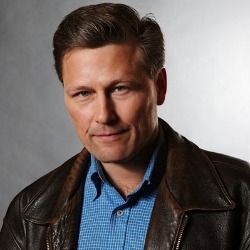 David Baldacci is a celebrated American novelist who has written the most loved novels of all time like Absolute Power, Wish You Well and The Finisher. David is often considered as the best-selling novelist of the United States. He is mostly known for his stories of white-collar crimes and government conspiracies.

David received his high school education from the Henrico High School. Later, he joined Virginia Commonwealth University from where he earned a law degree. After completion of university education, David practiced the law for 9 years, residing in Washington, D.C.

David has written many stories when he was a small kid. At his early days, he majorly wrote short stories. Later as he started to grow up, he began writing screenplays as well. While he was specializing law in Washington, he turned new way in his life as a novel writer.

David took 3 long years to write his first novel titled Absolute Power. The most loved novel of his career was published in 1996. In fact, it turned out as an international best-selling novel of that time. Later, the story of the novel was adapted as a movie with the same name Absolute Power.

After getting wide popularity from his Absolute Power, he moved on to writing and publishing more novels titled as Total Control, The Simple Truth, The Winner and Saving Faith.

In 2001, he earned more success and popularity by publishing next interesting novel Wish You Well. Till date, he has written 31 best-selling novels which are especially focused on adults. Likewise, his 5 novels are written for young readers too.

His novels have been translated into more than 45 languages and they have been sold in over 80 countries. This has helped Baldacci accumulate a noteworthy amount into his accounts.

Besides, he has been successful to make his name popular as a consulting producer of TNT TV series King & Maxwell.

Married to Michelle Collin, David is also a social worker

The world famous novelist David Baldacci is a married man. He is hitched to lovely lady named Michelle Collin. David exchanged wedding promises with his beautiful wife on 5th May 1990. From his happy conjugal life, he has 2 kids.

David is also actively involved in social welfare works. With his wife Michelle, he has founded a charity organization named as Wish You Well Foundation. The organization mainly works against illiteracy in the United States.

Passionate novelist David has a massive fanbase on Twitter

David has always been passionate about writing stories and novels. He is writing short stories for Children’s since very early age. Even after entering into adulthood, he continued his passion and wrote many adult novel series.

Two of his novels Absolute Power and Wish You Well’s story have also been adopted in the movies. His last novel titled The Last Mile was published on 19th April 2016.

He has a large number of fan following on social networking sites. Baldacci is followed by 24.5k followers on Twitter. Interesting facts about him can be assembled from Wikipedia and IMDb.