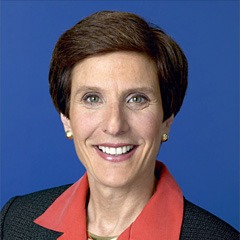 Irene got married for the first time to her fellow student Philip Rosenfeld. Her wedding vows with husband Philip took place at the time when she started her doctoral studies in 1977. From getting married to husband Philip, she has been blessed with two daughters named as Carol and Allison.

Irene’s splendid marriage life with Philip ended when he passed away in the year 1995. After some years, she found the happiness again in her life when she tied the knot with an investment banker named Richard Illgen. Even after her first spouse Philip’s death, she put his name as her middle name.

Rosenfeld has kept all information about her personal life secret. Even becoming one of the prominent names in the business world, she has been successful to maintain a low profile life.

Presently, she is living with her second husband Richard in a $3.9 million worth house which is based on shores of Lake Michigan in an affluent village of Kenilworth.

Irene attends many media events. However, she is not very active on social networking sites. Two years back, she takes the stage at The Wall Street Journal WSJECO. Let’s check out the post where she is tagged in.

Moving on to her professional career life, Irene Rosenfeld is currently holding the responsibility as a chairman and CEO of multinational company Mondelez International. She has been working in food and beverage industry for over 30 years.

Initially, she worked at the advertising agency called Dancer Fitzgerald Sample. After working several years there, she started working for General Foods. Her next work experience came as Chairperson and CEO of a subsidiary of PepsiCo, Frito-Lay, Inc. After working two years in June 2006, she was hired as CEO of manufacturing company Kraft Foods.

With having several years of work experience, she started getting enlisted as one of the famous business personalities. She got enlisted at 6th place on the list of The Wall Street Journal’s 50 Women to Watch.

Just a year back in 2015, she gave an interview to Fortune Magazine’s Susie Gharib where she gave some leadership advice and said women also should raise their hand.

In 2011, Kraft Foods made an official announcement that Irene would be staying as chairperson on $31 billion global snacking company. The company was later given a name as Mondelez Internatinoal Inc.

At present time, she is holding both obligations as a chairman and a CEO of the multinational food and beverage company Mondelez International.

Although Irene’s life was filled with grief for some times after the death of her first husband, she seems to have moved on from the incident. She is living a blissful life with her second husband Richard Illgen. She is enjoying the best of her life with an annual salary of approx. $30 million and a net worth of approx. $96 million.

Irene Rosenfeld, CEO of multinational company Mondelez International, finally found happiness after getting married to the second husband Richard Illgen. One of the most successful female business magnates, Irene has a very successful business career. Currently, she receives an estimated salary amount of $30 million dollars and has a net worth of approx. $96 million.