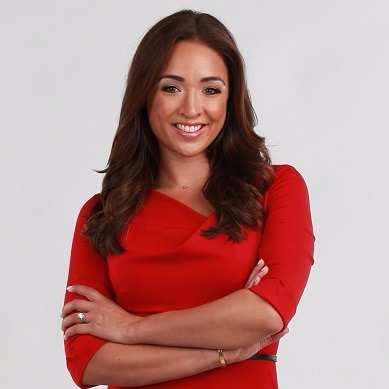 Cassidy Hubbarth is an American television anchor. She is one of the beautiful anchors in the industry today. Besides that this mixed ethnic hottie is one of the most followed TV anchors as well. She currently is anchoring ESPN’s Sportscenter and ESPN 2’s NBA tonight.

Cassidy Hubbarth was born on 19th September 1984 in Chicago, Illinois. Cassidy is the youngest child of the three children’s in her family. She belongs to a mixed ethnic group as her father is of German and Irish decent and her mother is of Filipino descent. Likewise, Cassidy was a graduate of Evanston Township High School in 2003.

Also while in her time in school, Hubbarth was a three-sport athlete for four straight years. She even took part in the ETHS State championship high school soccer team in 2002. Later after completing her education from her school, she achieved her Bachelors of Science degree from Medill School at Northwestern University.

Cassidy started her career as a host and as a reporter for Big Ten Network and Fox Sports South. Those periods were like training periods for her and while in those training periods she won an Emmy for her interactivity. After collecting basic information’s and valuable experience Cassidy joined ESPN in August 2010.

While in the starting phase of her career in ESPN, she anchored and hosted college football, college basketball, and the NBA. After continuing in the same post for almost 3 years, Cassidy became a full-time anchor for ESPN in March 2013. Since March she has been hosting SportsCenter, NBA tonight, The NBA today podcast and many others.

Besides being a successful TV anchor and a sportscaster Cassidy is also a hugely popular anchor and a TV personality amongst fans. She is active on social media. That shall be the reason for her to have a huge fan base. Moreover, she is also renowned for her admirable beauty. Her charming face and her perfectly maintained body make people fall for her. Standing tall with a height of 5ft and 10 inches, Cassidy Hubbarth is one of the talented and beautiful TV personalities of the present time.

Cassidy Hubbarth was born to father Gerry Hubbarth and mother Emmeline Hubbarth. She is the youngest children of the Hubbarth family that. Besides this information, the is not much information about Cassidy Hubbarth. Despite being successful and popular amongst her fans she has been able to keep her personal life away from the limelight. Still unmarried, details about when she shall get married or her current relationship status have not been disclosed yet.

Since March 2013 CassidyHubbarth has been working as a host of various shows under the ESPN banner. Some of her shows include NBA tonight, Highlight Express and the Numbers never lies.