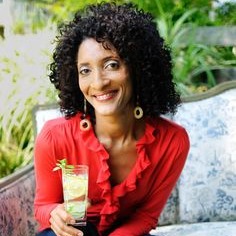 Carla Hall is a famous chef, TV personality, and entrepreneur best known as co-host of the one-hour talk show The Chew.  Carla is also a former model. She first rose to prominence by making her way up to the finals on the 5th and 8th seasons of Bravo’s cooking competition Top Chef.

Carla Hall was once a runway model.

On May 12, 1964, Carla Hall was born in Nashville, Tennessee. She went to Howard University’s Business School and graduated majoring in accounting in 1986. Afterward, Hall worked at Price Waterhouse for two years and received a Certified Public Accountant license when she realized that her passion was not in a desk job but somewhere else.

In 1988, she entered the glamor industry and spent several years walking the runways of Paris, London, and Milan. However, modeling wasn’t her ultimate career choice as she fell in love with culinary arts while modeling in those cities. She then returned to the US and started seeking an opportunity in food arts. Her parents’ encouragement to follow her dreams helped her realize a passion for cooking.

Carla Hall and her impressive resume as a chef: ‘Top Chef’ & ‘The Chew.’

Carla Hall’s journey as a chef began when she started a launch delivery service called Lunch Bunch. After four years there, she attended L’Academie de Cuisine and obtained a Culinary Career Training certificate. Following that, while serving an externship at Henley Park Hotel, she became a sous chef and later worked as executive chef at State Plaza.

Hall’s career breakthrough came when she entered the 5th season competition of Bravo TV’s Top Chef and wowed judges and the audience by winning over several tough challenges. Her personality and her famous philosophy of ‘cooking with love,’ which she defined as if one cooks with love, then the cuisine will be better, made her extremely popular. She also participated in the show’s eighth season and reached the final.

Carla Hall’s successful television career has helped her rack up huge net worth.

Since 2011, she’s been one of the four co-hosts of the one-hour-long food-related show on ABC, The Chew.  She has published two cookbooks: Cooking with Love: Comfort Food that Hugs You in 2012 and Carla’s Comfort Foods: Favorite Dishes from Around the World in 2014. Moreover, she owns a restaurant, Southern Kitchen, in Brooklyn, New York.

Hall and her husband Matthew parent a son

Popular chef Carla Hall has been married to Matthew Lyons for a long time. She met a lawyer & photographer husband through an online dating service called Match.com.

Everything you need to know about Carla Hall’s husband, Matthew Lyons