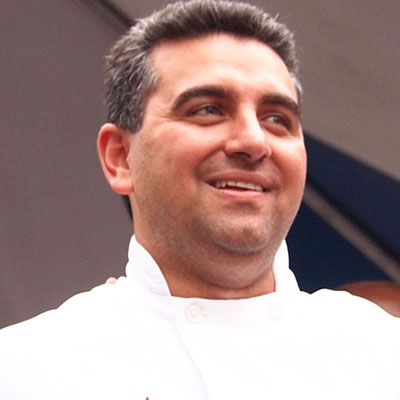 Buddy is known for making some of the wildest and most extravagant cakes in the country.

He became the owner of his father’s baking shop, Carlo’s Bakery at 17 after his father, Buddy Valastro Sr. died.

Here are some amazing facts about the famous pastry chef.

Looking at the incredibly artistic cakes Buddy and his team make, you may expect him to be super artistic, but he can’t draw.

Once his sister, Lisa spilled the beans on something pretty surprising that Valastro can decorate but can’t draw.

On November 13, 2014, when he was arrested for driving while intoxicated, he tried to pull rank saying, “You can’t arrest me. I’m the Cake Boss.”

He later posted an apology on Twitter admitting that he was wrong, his driver license was suspended for 90 days, and he was paid $300 fine.

In 2010, a year after Cake Boss premiered, a Seattle company sued TLC for copyright infringement.

The company claimed that their software program named CakeBoss had been around since 2006 and the channel was profiting from their trademarked name.

The lawsuit was finally settled out of court, and Buddy’s show was able to continue the title.

The price of the most expensive cake he’s ever made is $30 million. The cake was made for New York socialite, Devorah Rose.

On Devorah’s request, Buddy and his team used jewels like emeralds, sapphires, rubies and some flawless diamonds to make it the most expensive caker ever.

Fired his own sister

Once, he fired his own sister, Mary Sciarrone due to her bluntness and rude interactions with staffs and customers.

He even swore that Mary would never again have a chance to manage any of his bakeries.