Skip to content
Home » Entertainment » What is the Iron Chef Bobby Flay net worth in 2018?

What is the Iron Chef Bobby Flay net worth in 2018? 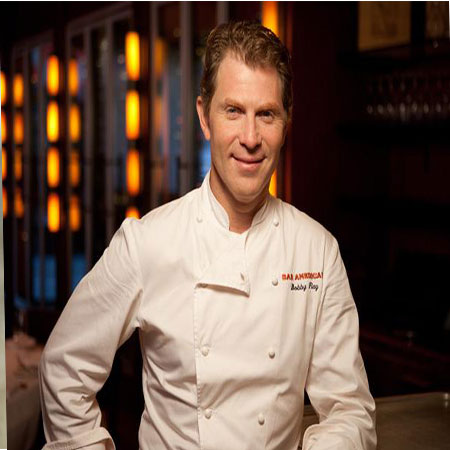 Bobby Flay, the Iron Chef, is an American celebrity chef, entrepreneur and TV personality who is an executive chef of several restaurants.

He was born on December 10, 1964, in New York and raised in Upper East Side neighborhood of Manhattan by Bill and Dorothy Flay.

After dropping out from high school at the age of 17, he started working at a pizza parlor and Baskin-Robbins.

He later took a job in Joe Allen restaurant where his father, Bill, was a partner.

After receiving his culinary degree, he started working as a sous-chef at the Brighton Grill on Third Avenue.

He later quit the job after realizing that he wasn’t ready to run a kitchen yet and took a job at Buds and Jams, where he learned southwestern and Cajun cuisine.

Jerome Kretchmer, the owner of Mesa Grill, offered him the position of executive chef after being impressed by Flay’s cooking.

He later partnered and opened Bolo Bar & Restaurant with Laurence Kretchmer in the Flatiron District in 1993.

The restaurant closed its doors on December 31, 2007, to make way for a condominium.

Bobby went on to open restaurants such as Mesa Grill in Las Vegas and Bahamas, Bar Americain, and Bobby Flay Steak.

Flay has been married three times, and he shares a daughter, Sophie Flay with his second wife, Kate Connelly.

He has been dating the actress, Helene Yorke, since February 2016 and they just celebrated their second year together.

As of 2018, Bobby Flay has garnered a net worth of approximately $30 million.