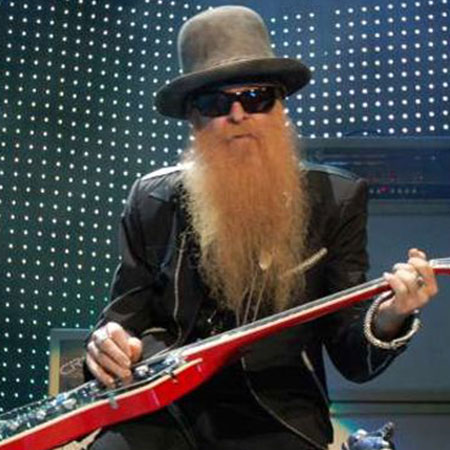 William Frederick Gibbons is an American singer, songwriter, producer and actor best known as the guitarist and vocalist of ZZ Top.

When it comes to guitars, Billy prefers Gibsons, and most of his guitars are built or modified by John Bolin.

And he has a vast collection of it too. His technician revealed it to be around 450, but the number may be higher.

Billy Gibbons is a member of the millionaire’s club with a net worth of approximately $60 million.

This is one of his favorite guitars, which he got as a gift on Christmas when he was 13.

He currently owns a replica of this guitar nicknamed ‘Mojo Maker’ and uses it during live performances.

The “Holy Grail” of Les Paul was Billy’s first Les Paul guitar which he bought from a rancher at a price of $250.

Billy uses its replicas for live gigs and keeps the original guitar safe. The replica features a Duncan humbucker in the neck position and a Thomas Nelson’s Cream T Special in the bridge.

The ZZ Top vocalist still refuses to sell the original guitar even though he was once offered $5 million for it.

During the start of his career with Moving Sidewalks, Billy played a white Esquire.

But he decided to switch to a Stratocaster mainly because Jimi Hendrix influenced him.

“I had an Esquire before the Strat, but when I saw Hendrix, it was all too much to bear. I said, I’ve got to try this.” – Billy Gibbons (TBD)

This is a custom guitar built by John Bolin, and Billy was seen using a couple of other different Supermodels.

This is Billy’s B rig furry guitar which was built by John Bolin.