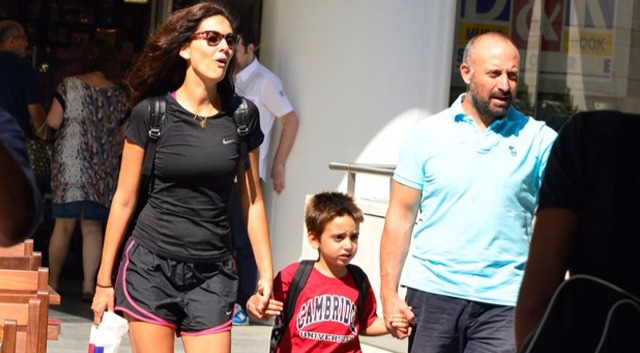 Berguzar Korel came to fame as a Turkish actress. Furthermore, Korel appeared in many TV shows and movies to date. And so, Berguzar managed to build a massive fanbase.

Acclaimed actress Berguzar Korel is a married woman. Her husband is none other than her 1001 Night co-star Halit Ergenç. The duo tied the knot on 7th August 2009 in Les Ottomans Hotel, Istanbul, Turkey.

They have already celebrated their 7th wedding anniversary and have become more than just husband and wife. They are proud parents to a cute baby boy Ali (born on 7th February 2010). Seemingly, the word like divorce is totally out of context, and no news about infidelity from both parties has ever been heard.

Their marriage ceremony was quite a lavish one. Korel wore a gown on a beautiful big day, which Hakan Yildirim designed. Thanks to stylist Ugur Alevyilmaz for making one of Turkish Cinema’s celebrated names look special at her wedding. For their honeymoon, the duo visited the city of love, Paris.

Measurements and Height of Berguzar

Korel is counted as one of the ravishingly beautiful women throughout Turkey. She has maintained her body figure perfectly. She is proving herself as an idol to all her fans, who has the desire to look like her to some extent.

Berguzar stands tall at 5 feet 11 inches and weighs around 64 kg. Dark brown eyes and long dark -brown colored hair all complement her mesmerizing personality. Despite being one of the sought-after artists in her homeland, she has not revealed her body measurements size.

In July 2011’s interview with ELLE Magazine, she shared some of her beauty secrets. She said, “I applied a strict diet after giving birth, I did Pilates. Moreover, I have a past in sports. I played volleyball for many years. But in general I feel good about myself because I’m happy. They think I’m cool like the screen, but when they start talking to me, seeing that I am far of this. The face and the look sweetens. After years and after cosmetic surgery, beauty of the face is the look and reflected the same way. “

Undeniably, women go through some major physical alterations after pregnancy. Berguzar, a mom of a son, also might have got. But, she has managed to stay fit. She is following a strict diet plan and undergoing workouts, which has helped her gain a glowing and pleasing personality. Read her detailed biography in the wiki. She is available on social media: Instagram, Facebook and Twitter.