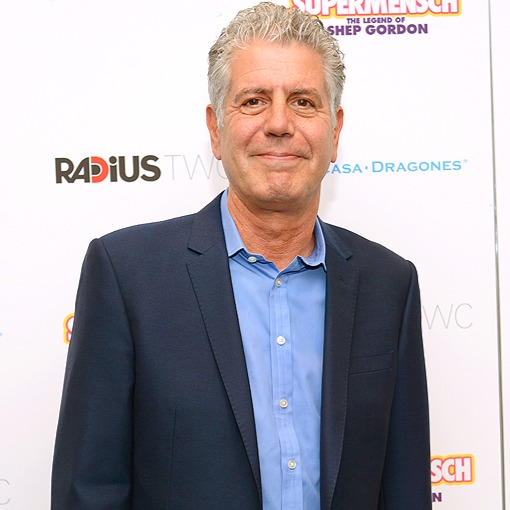 Anthony Bourdain isn’t just a chef. He moved out from the kitchen to become an award-winning TV personality and also a bestseller author, predominantly for his book Kitchen Confidential: Adventures in the Culinary Underbelly.

The success of the book led the enthusiastic culinary artist to the opportunity to explore his unique flairs for cooking in the television programs. He has been traveling throughout the world in search of the perfect meal. A veteran of various professional kitchens, he is known for his years-long contribution as executive chef at Brasserie Les Halles.

He has graced several small-screen networks with a variety of cooking-related shows including A Cook’s Tour in Food Network, Anthony Bourdain: No Reservations and The Layover in Travel Channel. He is also known to host Anthony Bourdain: Parts Unknown in CNN.

To a Columbia Records’ classical musical industry executive, Pierre Bourdain and The New York Times’ staff editor, Gladys Bourdain, he was born as Anthony Michael Bourdain in New York City, United States on 25th June 1956. According to Bourdain, his paternal ancestors were immigrants from France and followed Catholic faiths whereas his maternal ancestors were Jewish. However, he was brought up without religion in Leonia, New Jersey.

His love for food evolved in an early age when his family was on vacation in France. He graduated from Dwight-Englewood School in 1973 and went to Vassar College to further his education but dropped out after 2 years before graduating. To be exact, his interest in pursuing culinary career grew, while landing jobs in seafood restaurants in Provincetown, Massachusetts during his college days.

Anthony’s growing enthusiasm in cookery led him to join Culinary Institute of America and graduate in 1978. Afterward, he went on to run several restaurants kitchens in New York City, before entering Brasserie Les Halles and earn the title as ‘Chef-at-large’ working as an executive chef.

Despite being characterized as ‘culinary bad boy’ by various media, his exclusive talents and frank nature have made him favorite to many. From being twice married and divorced to being a big-time drinker, smoker and drug addict, he has candidly spoken about it all.

Currently single, he is a father of a daughter, Ariane born with 2nd wife Ottavia Busia, married from 2007 to 2016. Previously, he shared a long-time conjugal bond with his high-school girlfriend Nancy Putkoski from 1985 till 2005.