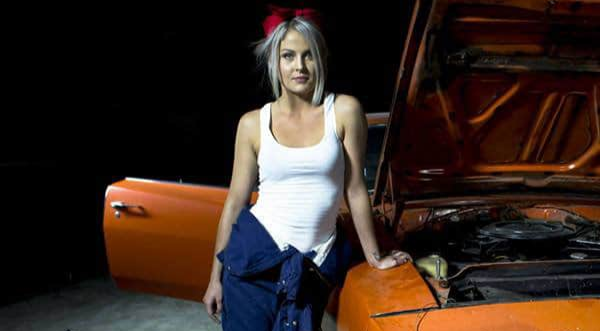 If you’ve watched the famous American automotive show, Graveyard Carz then you probably know Allysa Rose. She is among the principal members of the show and works alongside her father. Since the airing of season 1, the 28-year-old has been involved in other various things and has had significant lifestyle changes. Let’s find out what she is doing now?

Allysa Rose was born on May 17, 1991, and her given names was Allysa Worman. She is the daughter of the producer/director of Graveyard Carz, Mark Worman. However, not much is known about her mother and siblings.

The early life of Allysa is more like a closed book. She grew up with her family surrounded by car magazines and exotic-vintage Mopar cars. Her interest in this particular field started growing when she used to see her father work in the garage almost every day.

Before plunging into greasy oils and engines, she trained as a dancer. At the age of 7, she started learning different genres of dancing, including jazz, ballet, tap, and hip-hop. She also loved to go dirt-bike-riding with her father.

There aren’t many women in the field of the engineering, and it’s rare to find girls interested in car mechanics. However, Allysa is one of a kind.

She started her journey as a mechanic from the first season of Graveyard Carz, which first aired in on June 14, 2012. Filming primarily takes place in Springfield, Oregon. Although being daddy’s little girl and having an immense interest in cars, she didn’t appear in the 2nd, 3rd and 4th seasons of the show due to some personal reasons.

As the motto of the shop, “Mopar or No Car,” Allysa loves working with Mopar Cars. Like her dad, she is also an expert in the ’60s and 70’s category cars. She is addressed as Ghoul- a title given only to the experts on the show. If you’re wondering what the diva drives herself, it’s a 2014 Dodge Charger!

The car make-over guru is a divorced lady. She was married to Josh Rose, an Australian footballer, and her former colleague. Josh was one of the cast members during the first season of the show, often featured as one of the mechanics.

The exact dates of their marriage and divorce are yet to be disclosed, but it all happened within the short period of 4 seasons. Allysa gave birth to their baby girl, Emma Rose on August 29, 2010. Later, Josh disappeared from the show and was rumored to have left because of the less pay. Some fans even speculated that he left the show because it was difficult for him to work with his ex-wife.

Which one is true? Well, only Josh knows that.

Despite the divorce, they have maintained a peaceful and understanding relationship. They both look after their daughter with mutual guardianship and take equal custody. The father-daughter duo has been traveling and enjoying each other’s company. The proud father has been showing off his daughter by posting pictures of the two on his Instagram account.

After the divorce, Allysa picked up the broken pieces of her life and shared it with Chris Wanke.

According to Chris’s bio on Facebook, he is said to be a retail store manager at T-mobile. The detail about their first meeting has not been disclosed. Their relationship seems to be blooming as they are seen going to different places with their two daughters.

Chris announced that Allysa was pregnant on July 29, 2014. On January 18, 2015, she gave birth to her second daughter, Brooklyn Monroe Wanke.

The mother of two has been balancing personal and private life very well. She shares adorable pictures of her two daughters on Instagram. Talking about how much she earns and what her net worth is, that information has not been made public.

Do you think that this sweet couple will take a step forward and get married soon?