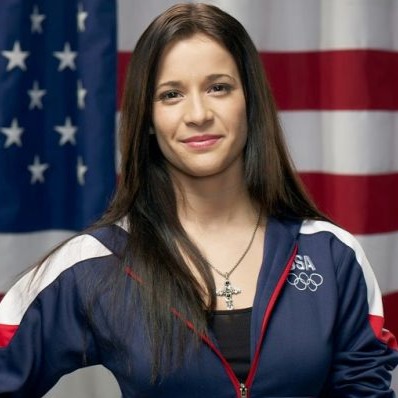 Alicia Sacramone came to fame as a retired American artistic gymnast. Moreover, Sacramone bagged a silver medal during the Beijing Olympics in 2008.

Alicia is the second-most decorated gymnast from the United States in the history of the World Championship. She won 18 medals in various international championships for America.

Sacramone was born to orthodontist father Fred Sacramone and hairstylist mother Gail Sacramone on December 3, 1987, as their second child. She is of Italian descent. She attended Winchester High School and graduated in 2006.

Alicia started dancing at the age of 5 and joined gymnastics when she was eight. Her mentors are Mihai and Silvia Brestyan, who remained her coach till the final days of her career.

Sacramone trained with the Brestyans at the club Gymnastics and More and later at their training center in Massachusetts. She made it to the elite level in 2002 and the national team in 2003.

What is Gabby Douglas’s net worth source alongside her winning gymnastics career?

Alicia is the second most decorated US gymnast in World Championship

Sacramone started her professional career at the national championships in 2003, placing 14th. She won bronze for floor exercise and secured the fourth position on vault. Following the performance, she won a place on the national team.

In 2004, she won a gold medal at the Pacific Alliance Championships. This performance from which she come out as a contender for the US Olympic team. However, she could not represent the country then. She won gold for Vault defeating the reigning champion at the World Cup final.

Alicia joined Brown University in 2006 and joined the gymnastic team, where she broke all records in all-around, vault and floor exercises. In 2007, she competed at the National Championships, defended her title on vault, and came second on floor exercise and third on the balance team.

After the performance, she landed a spot on the American team for World Championships in Stuttgart, Germany. At the championship, she placed third on vault, second on floor exercise and first as a team.

Alicia’s major achievement was placing second at the Olympic Games in Beijing in 2008. However, she fell during floor exercise and beam. Following the disappointment, she announced her retirement but returned in 2009. She repeated her National and World Championships performance, earning gold and silver medals. She retired in 2013 with ten World Championship medals.

The US National Team’s salary and endorsements have increased her net worth. And currently, Sacramone holds an estimated net worth of $8 million.

Alicia Sacramone & husband have been together since 2007

Sacramone is married to former American football quarterback Brady Quinn. The couple started dating in 2007 and got engaged in 2013. They tied the knot in 2014.

The couple has a daughter, Sloan Scott Quinn, born on August 6, 2016. Learn more about them in Sacramone’s married life!

Who is Gabby Douglas’s boyfriend? About her relationship with her father & mother.