Skip to content
Home » Entertainment » Why newscaster Robin Roberts is secretive about her personal life? Is she married or single?

Why newscaster Robin Roberts is secretive about her personal life? Is she married or single? 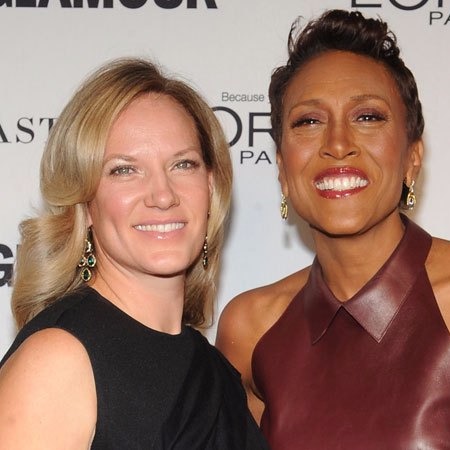 Robin Roberts, the ABC newscaster, is no longer being secretive on her personal life. However, if she were to ever get married, she will not be having a husband. The lesbian reporter has been dating her girlfriend or soon-to- be-wife from 11 years.

After battling a courageous fight against myelodysplastic syndrome, the Good Morning America host went on to publicly thank her loved ones, doctors and also announced that she is a lesbian. That was the first time she had come out to the media.

Perfect ending to a wonderful, restful & much appreciated vacation..celebrating my Amber’s birthday! #absolutebliss

With her coming out, she also revealed her partner of many years.

She is Amber Laign, a massage therapist.Laign is now 39 years old and is 14 years younger than Roberts. They met through common friends on a blind date and are together since 2005.

Though Roberts is a famous woman who has authored her own life, Laign prefers to stay hushed about her personal life. Robert’s co-workers and friends were also understanding enough not to reveal Robert’s sexual identity to the public even when they knew it from a long time.

Roberts speaks highly of her girlfriend who remained very supportive through all the period when Roberts was undergoing the treatments. Roberts said,"There is no fuss with us. We're so happy. We've been happily in a relationship for 10 years and are looking forward to the next 10 after that."

Supportive families of Robin Roberts and Amber Laign, yet to revealed their marriage plan

Also, the couple’s families were well known about their relationship and the two have received complete support from them. Amber’s mother said to the The Daily Mail “We are very, very happy for them. Her dad and I and the whole family are very happy and totally supportive.” However, the couple is yet to take their relationship to the new level of marriage.

Neither single nor married yet, Robin Roberts is looking forward to continuing being in a blessed relationship with her partner. Perhaps, Roberts has planned for the perfect moment to come to get married to her to-be-wife. The couples are yet to decide and revealed their marriage plan.

Whether it is a medical condition or any small day-to-day troubles, the couple together has braved it all. And this time, as the whole world knows about Robin Roberts’s sexual orientation, they do not have to be secretive about it.