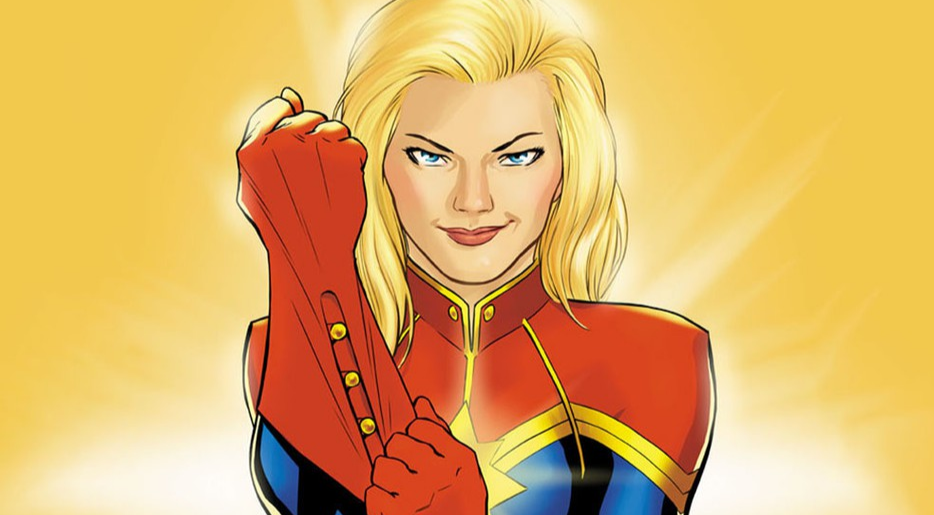 When Marvel fans walked out of Avengers: Infinity War, their expressions were understandably thunderstruck. The epic climax saw the mad Titan Thanos wipe out half the superhero roster along with half of the universe by combining the powers of six infinity stones. As eerie music signaled the end of the movie, the ending credits were filled with utter silence as everyone was thinking the same thing, ‘What happens now?’

Luckily for us, good old Marvel dropped a massive hint in the after credits scene. As agent Maria Hill disintegrated to dust, former SHIELD Director Nick Fury reached for a high tech pager. Fury sent what can only be presumed to be an emergency signal. As Fury himself was wiped from existence, we saw the pixelated version of Captain Marvel’s symbol on the device. To call it a clever easter egg would be an understatement, the masterful reference to this powerful superhero sets the stage for the most decisive chapter in the Marvel Cinematic Universe history. Captain Marvel it seems, is the last hope that Nick Fury has, to fight the apocalyptic effects of Thanos’s fatal infinity gauntlet snap.

So what do we know about the future of the MCU? Well, not much. Marvel has been extremely private and careful with what it teases and what it holds back from the audience. However, we have received two trailers for the upcoming Captain Marvel movie. The movie is slated to release on March 8, 2019, and is set in the year 1995, long before the events of Infinity War. The movie will explore the origins of Carol Danvers aka Captain Marvel and her abilities. Based on the trailers, we’ve established some context and have some ideas about what we will see in the film.

The Skrulls and Kree have been part of the Marvel Cinematic Universe for a while now. The Skrulls are alien species with the ability to shapeshift on will. They have reptilian skin and long pointed ears. These beings are obsessed with war and racial purity. They have been warring with the Krees, a technologically advanced warrior alien race who have existed millions of years before humankind.

The Kree are humanoid in appearance and have either blue or white skin. Carol Danvers aka Captain Marvel is also part Kree after her human DNA was fused with Kree DNA. The Skrull-Kree war has been a major storyline in the Marvel Comics continuity and is likely going to be explored further in 2019’s Captain Marvel. The ongoing war also reached the Earth at some point and brought about the Secret Invasion event in Marvel Comics. The Kree were first introduced to the universe in Agents of Shields when Agent Phil Coulson finds a Kree corpse in a secret research facility. They were also present in Guardians of the Galaxy, with Ronan the Accuser being a Kree leader. However, this is the first time we are seeing the Skrulls. Captain Marvel will explore the story behind the warring species as producer Kevin Feige says,

“Captain Marvel will be our 21st film in the cinematic universe, and we’ve never seen the Skrulls. How come? We thought it would be fun. There’s an entire section of our comics that deal with the Kree/Skrull war, and we haven’t tapped into that at all, and we thought that would be an amazing, huge part of the mythology to belong to Captain Marvel.” 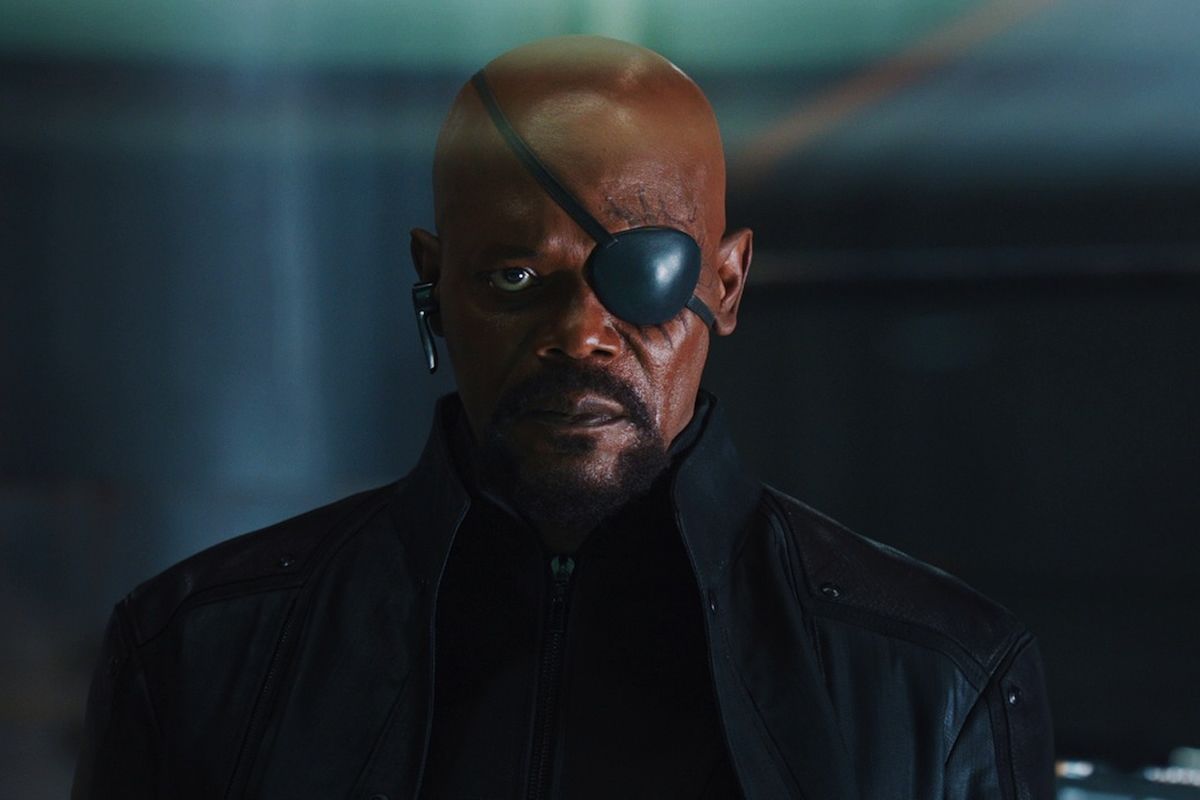 Captain Marvel is the first superhero that Nick Fury encounters in his S.H.I.E.L.D career. The film’s premise is set in 1995 with a digitally de-aged Samuel L. Jackson reprising his role. Fury hasn’t worn his signature eye patch yet and is at this time still a low-level bureaucrat for S.H.I.E.L.D. Unlike his more grizzled and cynical older character, Fury is still an idealist. Jackson described this younger version of Fury as a ‘desk jockey’ and a staunch believer in bureaucracy. In his first introduction in the MCU, Nick Fury is already wearing the eye patch as he talks to Tony Stark about the Avengers initiative. Since Captain Marvel is the only planned film that revisits the Phase 1 MCU era, it would be logical to assume that we will see how Fury lost his eye. We will also likely see Nick Fury’s rise to power in S.H.I.E.L.D, leading up to his appointment as Director.

Ronan The Accuser was first introduced to the MCU in Guardians of the Galaxy. Ronan was a fanatic warlord, a formerly high ranking Kree official that was obsessed with destroying the planet of Xandar. Serving as the big bad of the first Guardians of the Galaxy film, Ronan was already in contact with Thanos and was fulfilling the mad Titan’s commands in the hopes that he would assist him in destroying Xandar. 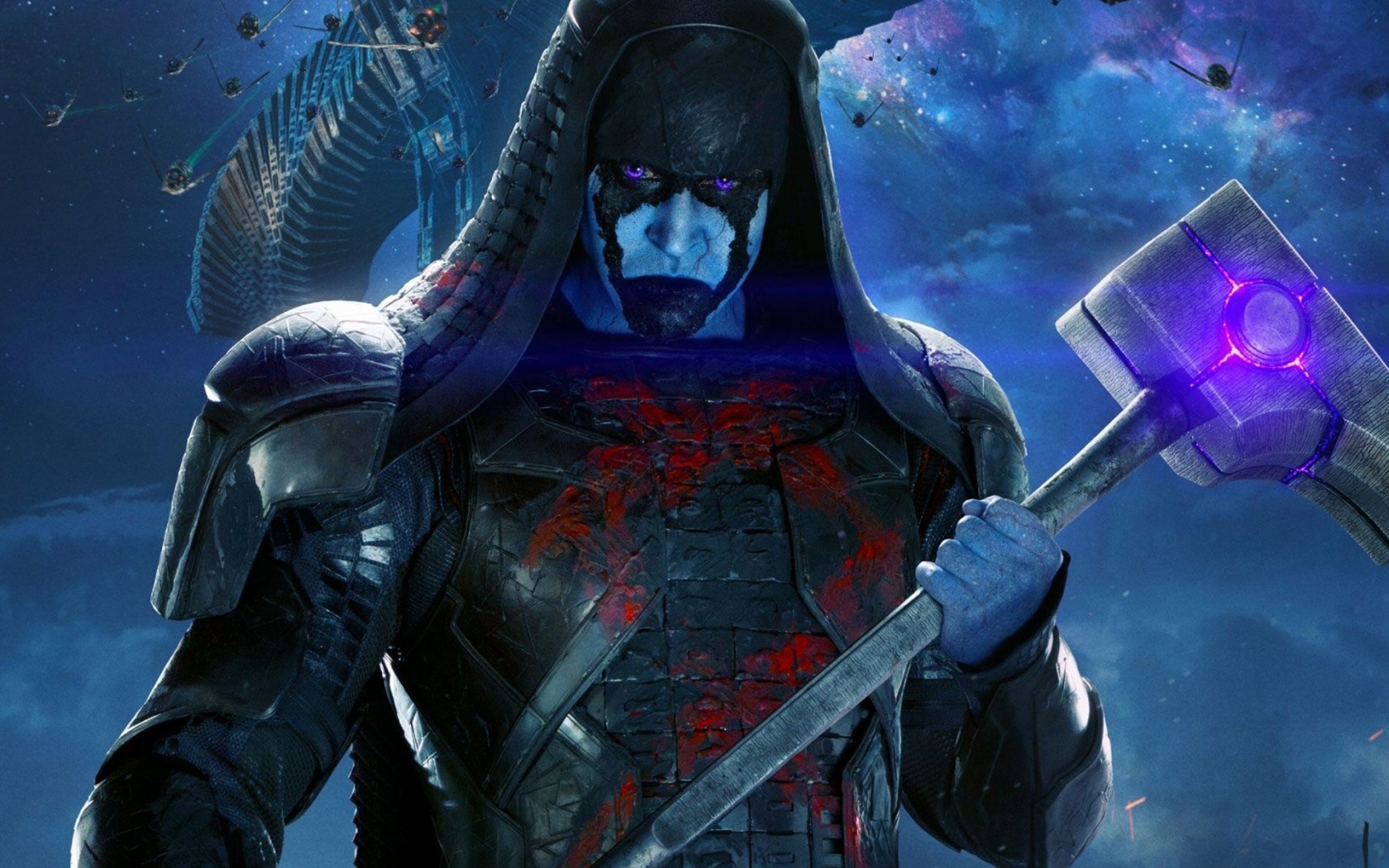 He is also present in Captain Marvel as a younger, high ranking Kree leader. While he hasn’t been shown explicitly, Ronan has been teased many times throughout the trailers. He is first seen as a silhouette, clutching his cosmic-rod as Carol Danvers and her team Starforce head towards a spaceship. He is next seen in a brief frame, looking out through a window as a space battle rages on outside Earth’s atmosphere. The cosmic-rod, a distinct hammer like weapon given to select Kree officials, was used by Ronan in the Guardians movie to contain the Power stone. Ronan was ultimately destroyed by Starlord and the rest of the Guardians with the said stone. In Captain Marvel, we will see Ronan before he became a radical. We might get a glimpse of his relationship with Thanos as well. 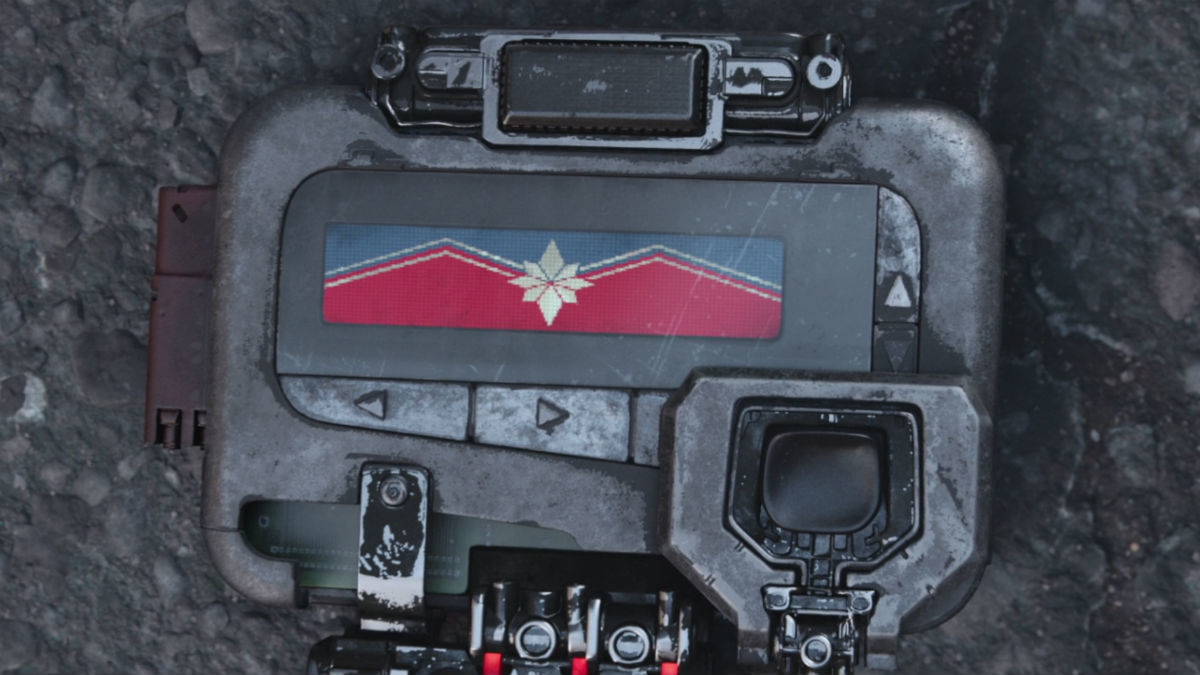 Well, this is a no-brainer. Infinity War ended with an explicit reference to Captain Marvel. Carol Danvers is Nick Fury’s last resort. It is possible that Fury activated a warning to Danvers or to the Kree empire about the impending doom of the infinity snap. It could also be Fury signaling the activation of some elaborate plan contrived with Captain Marvel to combat a possible apocalyptic event. Whatever it is, there is no doubt that the events of Infinity War will tie in with Captain Marvel. We sure are excited to see the role Danvers plays in the MCU’s most important event till date. Avengers 4 releases just two months after Captain Marvel.

Starforce, an elite strike team of the Kree military was featured quite prominently in the second Captain Marvel trailer. We saw some footages of its members that included both old and new faces. We saw Korath the Pursuer, first introduced in Guardians of the Galaxy as a loyal soldier of the fanatic Ronan. 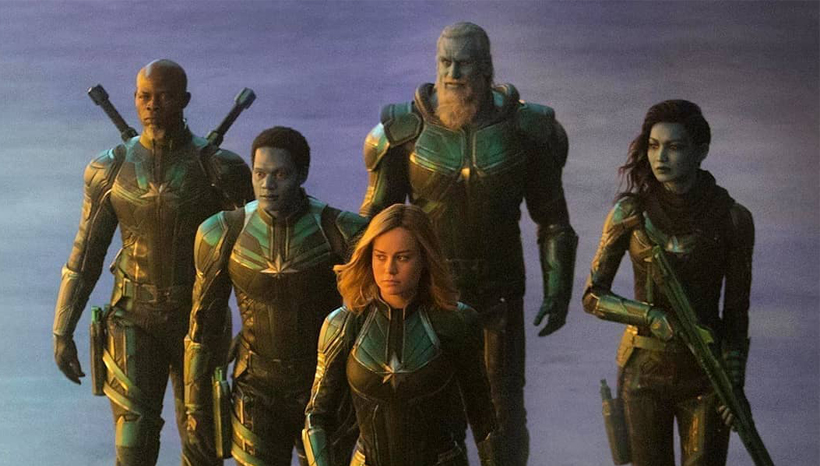 Korath was tasked with finding the orb that contained the Power stone, which was stolen by Peter Quill aka Starlord. Korath was eventually overpowered and killed by Drax the Destroyer during the Battle of Xandar. In Captain Marvel, Korath is still serving the Kree empire. Besides Korath is Minn-Erva, the team sniper, Att-Lass and Bron-Char. Carol herself is also a member and is led by Jude Law’s mysterious character who is so far known only as Starforce commander. All members of Starforce answer to Ronan and we are bound to see the team undertake various missions throughout the film. We may also see how Starforce and its members change alliances by the end.

Carol Danvers has had quite an interstellar journey. Between her time in Earth, her career as a jet pilot and her superhero career, she has traveled across various planets and galaxies. Based on the trailers, we have seen flashes of her memories revolving around her childhood, military career and her time in Starforce. 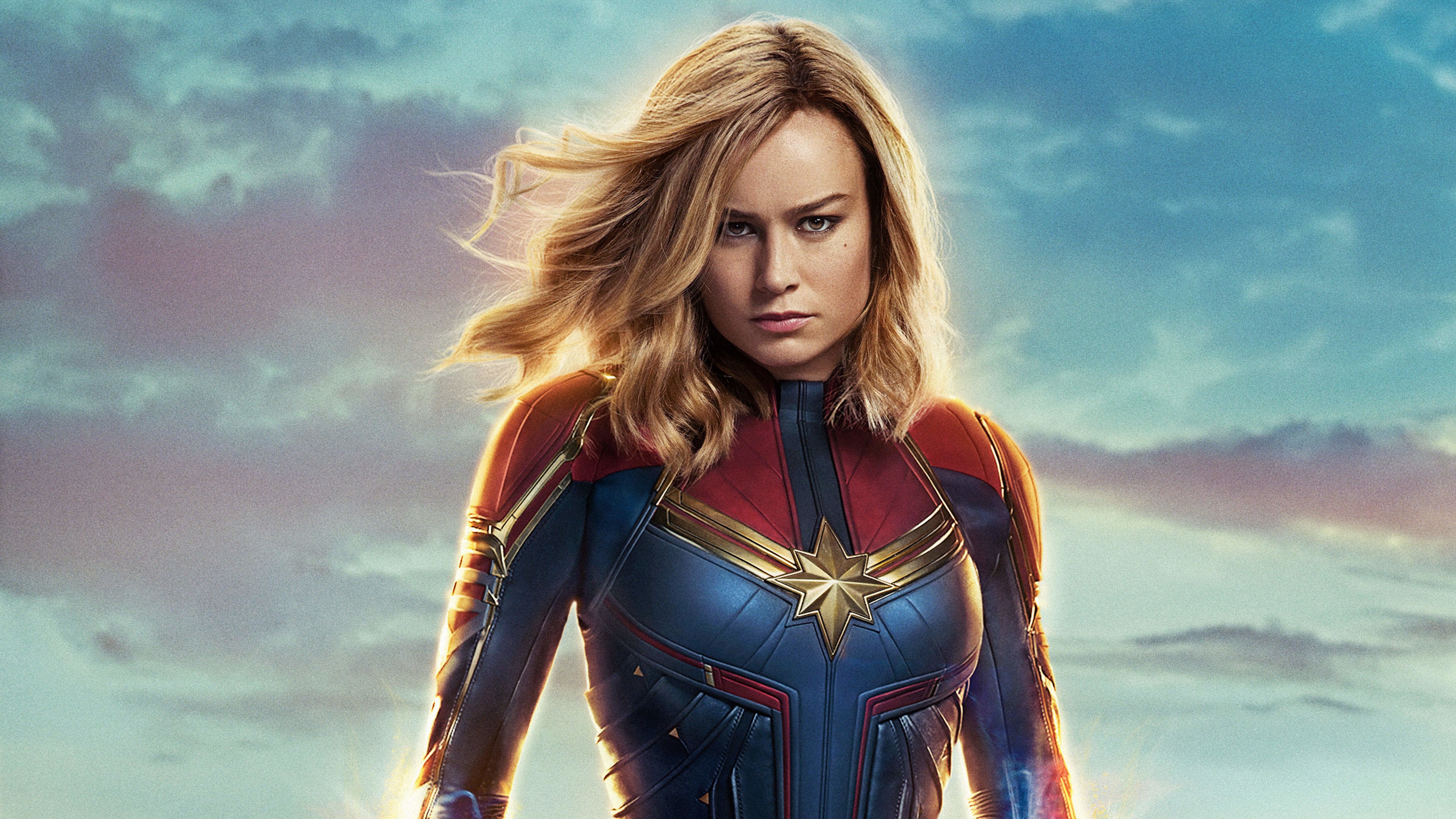 Thus it is safe to say that we will be seeing Captain Marvel’s origin story. This was a concern for many after Spiderman: Homecoming did not delve into the origins story of Peter Parker’s web-slinging superhero. Based on Carol’s questions she is searching for answers about her life on earth. In a small frame, we see an explosion hit Danvers, which is likely referencing how she first met the Kree. We hope to see the film delve deep into Captain Marvel’s origins.

Captain Marvel releases on March 8th, 2019. Brie Larson plays the role of Carol Danvers aka Captain Marvel and is supported by a talented cast of actors such as Jude Law, Samuel L Jackson, Gemma Chan, Ben Mendelsohn and Djimon Hounsou. It will be the 21st installment in the Marvel Cinematic Universe and will be the last movie before End Game.