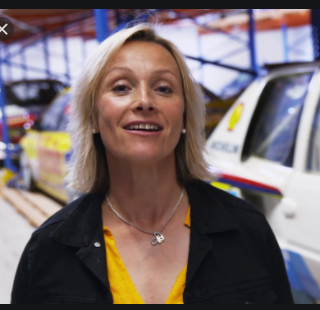 Vicki Butler-Henderson is a British racing driver and motoring journalist, who is known as the co-host of ‘Fifth Gear.’

She was born as Victoria Jemma Butler-Henderson on February 16, 1972, in Hertfordshire, England in a racing family.

Vicki started racing karts when she was 12 years old competing against David Coulthard.

She spent several years racing around Britain and started working as a racing instructor at Brands Hatch & Silverstone Circuit at 17.

She has competed in series such as the 2000 Pentel Ginetta Championship and Formula First.

Additionally, she has raced in many other events like Porsche Cup, Radicals, a combine harvester race, Rallye Sunseeker and the Speyside Stages Rally.

She is the first woman ever to win the Maserati Trofeo race. She won the race with her co-driver, Matthew Marsh.

She launched her career in auto journalism, working for British motoring magazines like What Car?, Auto Express and Performance Car.

Vicki joined BBC’s flagship motoring show, Top Gear (1977 TV series), as a presenter in 1997 and later moved to Channel 5 in 2002 after the show was canceled.

Then, she, along with her co-presenters, Tiff Needell and Quentin Willson, continued working on Channel 5 show, Fifth Gear.

Only Vicki and Needell were the original presenters, who remained with the show till its cancellation in 2016.

In recent years, Vicki has broadened her media career. She co-hosted various shows on Virgin Radio and recorded voice-overs for radio and TV ads.

She has been married to a TV producer and director, Phil Churchward since 2007 and they have two children, a son and a daughter.

Churchward has worked as a producer of ‘Fifth Gear’ and director of ‘Top Gear’ and ‘The Grand Tour.’

Throughout the years, she has accumulated a net worth of approx. $900k.