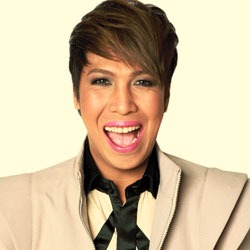 Vice Ganda was born as Jose Marie Borja Viceral on 31st March 1976 in Tondo, Manila, Philippines. His dad was a barangay captain who was killed when he was young. He attended the Far Eastern University, majoring in political science.

In his early career days, he worked alongside fellow comedians Chokoleit, John Lapus, Pooh and Rey Kilay. Till date, Vice has made appearances in several TV series such as Dyosa and Maging Sino Ka Man: Ang Pagbabalik. In 2009, he joined the talent show, It’s Showtime, and currently appears on the show as a host and judge. In addition to this, Vice also hosts a Sunday talk show, Gandang Gabi, Vice! He is presently being managed by ABS-CBN.
Vice has grabbed several awards in his career.

He received the Bert Marcelo Achievement Award for Excellence in Comedy at the 2011 GMMSF Box-Office Entertainment Awards for the comedy drama movie, Petrang Kabayo. Likewise, for his brilliant performance in the comedy parody movie Girl, Boy, Bakla, Tomboy, Vice was honored with Movie Actor of the Year at the 30th PMPC Star Awards for Movies in 2014. For his most popular movie till date, The Unkabogable Praybeyt Benjamin, he received the Phenomenal Box Office Star award at the 2013 GMMSF Box-Office Entertainment Awards.

Openly gay, Vice Ganda has not found his new boyfriend yet

Vice Ganda is currently single. Vice dated Terrence Bill Romeo in 2009. Terrence is a well-known Filipino professional basketball player who has played for the basketball team GlobalPort Batang Pier in the Philippine Basketball Association (PBA). The celebrity couple was together for five years. During these years, Vice was also linked with Filipino basketball player, RR Garcia. However, neither of them ever confirmed their relationship.

Likewise, a few years back, Vice was also rumored to be dating Kevin Alas, also a professional basketball player. The rumor became widespread when Filipino child actor, Biby Aquino Yap, referred Kevin as Vice’s boyfriend in one of the live interviews on the talk show The Buzz. However, Kevin clearly denied the allegation.

Vice last dated the winner of Mr. Chinatown 2014, Kurt Ong. If rumors are to be believed, Vice and the dashing actor were together for almost a year. They starred together in the hit movie, The Unkabogable Praybeyt Benjamin.

Besides his real life link-ups, the audience loved Vice’s on-screen romance with the beautiful Filipino actress, Toni Gonzaga. Vice and Toni worked together in the 2012 Filipino comedy parody movie, This Guy’s In Love With U Mare!

Quite active on Twitter, Vice Ganda is also fond of tattoo

Through his long journey and dedication in the entertainment world, Vice has gathered a huge fan following. He is followed by 8.15 million fans on his official Twitter @vicegandako. He tweets fairly regularly and has a knack of sharing funny photos. Vice is also popular on Instagram. For his official Instagram handle, he has used the name of his highest grossing movie. According to his Instagram bio, “PraybeytBenjamin is the movie that gave [him] [his] first of five straight Phenomenal Box Office Star awards.” As of December 2016, Vice has 4 million followers @praybeytbenjamin.

Vice also seems to be fond of inking his body. Recently, he got a new tattoo on the show, Kris TV. The tattoo is on his right forearm and reads, “Look at the stars, see their beauty and in that beauty, see yourself.” The video of Vice getting the tattoo is available on YouTube.

Vice’s first tattoo was a star on his wrist. He got three more stars on his neck in 2011. According to Vice, his tattoos are a representation of the blessings he’s received.

A standout among Filipino celebrities, Vice Ganda has appeared in several movies till date, which have turned out as the highest grossing movies in Filipino cinema. He is best recognized as an actor for his starring role in the action spoof movie The Unkabogable Praybeyt Benjamin, which is the fifth highest-grossing movie in the history of Filipino cinema. The most recent Vice Ganda starrer, The Super Parental Guardians, had the biggest opening day of all-time in Filipino box office.

Mostly known for using sarcasm and situational irony in his stand-ups, Vice has also been successful as a singer. He has released total three studio albums. At present, Vice is working as a regular host and judge on It’s Showtime.

The popular stand-up comedian is openly gay and is one of the most renowned LGBT figures in the Philippines. His name has been linked up with many Filipino celebrities like Terrence Bill Romeo, RR Garcia, and Kurt Ong.

Vice is also known for his sense of fashion and dashing personality. He is often seen trying out different hairstyles. He has a large presence on social media. He has over 4 million followers on his Instagram account @praybeytbenjamin. The multi-talented entertainer is also active on Twitter @vicegandam0.