Skip to content
Home » Entertainment » The Fall Guy Cast: Then and Now 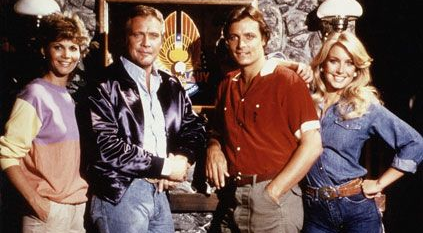 Who doesn’t love watching stunts, chase scenes, explosions, good tough guys beating evil villains mixed with a blend of humour, beautiful women, all packed in an episode? The American TV Series, The Fall Guy, was an escapist entertainment at its best.

The show followed Hollywood stunt performers who moonlighted as bounty hunters. As simple as it sounds, the action series ran for five seasons, 113 episodes from November 4, 1981, to May 2, 1986, and became one of the essentials of the decade.

More than 30 years have passed since the show ended. Let’s take a look at what the cast of The Fall Guy is up to in 2019.

Lee Majors played the tough guy, Colt Seavers, who spends his time as a stunt man in the day and bounty hunter in the night in his iconic GMC Truck. This role marked the return of Majors in television three years after The Six Million Dollar Man ended.

Lee, who had several films under his credit before appearing as Colt Seavers in The Fall Guy, continued to appear in movies, usually in supporting and minor roles. He appeared in films like Trojan War (1997), Primary Suspect (2000), Arizona Summer (2004), Jerusalem Countdown (2011), and Do You Believe? (2015), among others.

In 2003, Majors underwent heart bypass surgery. Since the show’s end, Lee, a twice-divorced, married further two times. The 80-year-old currently lives in Houston, Texas, with his wife, Faith Cross, whom he married on November 1, 2002.

Apprentice to Colt Seavers during the hunt, Howie Munson. Actor Douglas Barr played a stuntman-in-training. After The Fall Guy, Barr appeared in the short-lived TV series The Wizard and made recurring appearances in the hit series Designing Women.

After that, he made one-episode appearances in several TV series like Superboy (1988), A Peaceable Kingdom (1989), and One West Waikiki (1994). Besides the film industry, Douglas makes his living through a small, high-end wine producer called Hollywood and Vine Cellars in Napa Valley, which he bought in 1998.

Where is the cast of Freaks and Geeks now? James Franco, Seth Rogen, and more

The 70-year-old actor and director have been married to Clare Kirkconnell since June 9, 1984. They have a son, Wilson Barr.

The blonde beauty of the group, Jody Banks, was played by Heather Thomas in all five seasons. While playing in The Fall Guy, Heather became addicted to cocaine and had to join rehabilitation. Fortunately, she came out of the substance abuse and starred in films like Cyclone and Kiss of the Cobra in 1987.

In the 1987 television movie Ford: The Man and the Machine, her role earned her a Gemini Award nomination. She appeared as Marlyn Monore in the mini-series Hoover vs The Kennedys: The Second Civil War.

Heather left the acting industry behind to focus more on her personal life and gave continuity to her love of writing, partly because she was stalked by strangers frequently. She published her first novel, Trophies, in April 2008. Her last appearance was in the film, Girltrash: All Night Long, a 2014 musical comedy, 16 years after her previous appearance in the 1998 film, My Giant.

She also serves on the advisory boards of the Rape Foundation and Amazon Conservation Team. The 61-year-old married Skip Brittenham in 1992, and they have a daughter, India Rose.

Actress Jo Ann Pflug played the role of the Big Jack in the first season of The Fall Guy. Before The Fall Guy, she had supporting roles in a few movies, including MASH and Catlow.

In 1984, she became the first actress to play Taylor Chapin in Rituals soap opera. She also made guest appearances in shows like Charlie’s Angels, The Dukes of Hazzard, Knight Rider, The Love Boat, Adam-12, Quincy, and M.E. She also ran The Jo Ann Pflug Show Seaview Radio.

The 79-year-old has married twice. Jo first tied the knot with Chuck Woolery but divorced in 1982. She married Charles Young in 1988, with whom she lives in Tequesta, Florida.

After Jo Ann left the show, Markie Post played the role of bail bondswoman Terri Shannon in the 64 episodes of the show. Following the presentation, Markie played a public defender Christine Sullivan on the television sitcom Night Court from 1985 to 1992.

After that, she appeared as Georgie Anne Lahti Hartman on another television sitcom, Hearts Afire, from 1992 to 1995. She also appeared in movies like There’s Something About Mary (1998) and Cook-Off! (2007), Muffin Top: A Love Story (2014), and Four Christmases and a Wedding (2017). Her most recent acting engagement was in the 2018 TV comedy-horror series Santa Clarita Diet.

Where Is The Brady Bunch cast now? Maureen McCormick, Eve Plumb, and more

Markie has been married to actor and writer Michael A. Ross since 1982 and has two daughters, Daisy and Katie Ross. These days, the 68-year-old lives in California.