Into the Story of Illinois Senator Tammy Duckworth 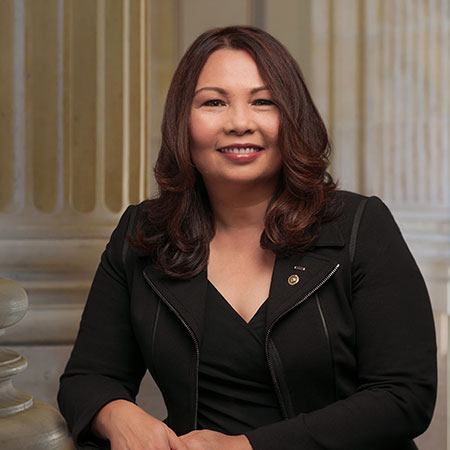 Tammy Duckworth was born on March 12, 1968, in Bangkok, Thailand, to an American Marine, Franklin Duckworth who had served in the World War II.

While Franklin was transferred to Thailand, he met Tammy’s mother and soon married her, and Tammy was born there.

Tammy grew up moving around the Southeast Asian countries like Thailand, Cambodia, Indonesia, and Singapore for first 16 years of her life.

Addressing her harsh and chaotic childhood days, she stated, “I remember my mother taking me as a very little kid to the roof of our home in Phnom Penh, Cambodia, to look at the bombs exploding in the distance.”

By 1982, her family was living in Singapore, where she was enrolled at the Singapore American School. She excelled in her studies and athletics in her school.

Her family settled in Hawaii when she was 16 years old, and she graduated with a BFA in political science from the University of Hawaii in 1989. She obtained a Master of Arts in International Affairs from the George Washington University.

One of the toughest times in her life was after her family moved to the US and loss of her father’s job pushed them to poverty as they had to rely on the lowest-price foods every day.

In 1990, she joined the Army Reserve Officers’ Training Corps, following her father’s footsteps and became a commissioned officer in the US Army Reserve in 1992.

She wanted to be an ambassador but eventually got fascinated by the Army. While at ROTC, met the love of her life, a fellow cadet named Bryan Bowlsbey.

Later, when she was deployed to Iraq in 2004, she was  pursuing Ph.D. in political science at Northern Illinois University with interest in Southeast Asia’s political economy and public health.

On Nov. 12, 2004, she encountered the most tragic moment of her life during the Iraq War when the UH-60 Black Hawk helicopter which she was co-piloting was hit by a grenade fired by Iraqi insurgents.

The aftermath of the accident saw the loss of her right leg near the hip and left leg below the knee making her the first female double amputee of the Iraq war.

The explosion also almost destroyed her right arm as it broke her arm in three places and tore the tissue.

On December 3, she received a Purple Heart and was promoted to Major on December 21 at the Walter Reed Army Medical Center along with an Air Medal and Army Commendation Medal.

She celebrates every November 12 as “Alive Day,” and on the day, she tries to get together with her crewmates who saved her life.

She retired from the Illinois Army National Guard in October 2014 as a lieutenant colonel and went to complete Ph.D. in Human Services from Capella University in March 2015.

While recuperating, Tammy became interested in politics as some politicians went to meet her and she befriended former Senator and Republican presidential nominee Bob Dole.

Afterwards, she started considering a political career of her own and got along with Democrat, Dick Durbin, who considering her passion and persistence suggested her to try for office.

She served as the Director of the Illinois Department of Veterans’ Affairs from 2006 to 2009.

In 2009, President Barack Obama appointed her to the Assistant Secretary of Public and Intergovernmental Affairs of the federal Department of Veterans Affairs and she served the position till 2011.

In 2012, she assumed the office at Illinois’s 8th District, and during her tenure, she backed legislation to support veterans.

Since 2017, she has been serving as the junior US Senator from Illinois with Dick Durbin.

She got married to Major Bryan W. Bowlsbey, in 1993 and had a daughter, Abigail O’kalani Bowlsbey with him.

She announced her second pregnancy on January 25, 2018, and has stated that she will give birth to her second baby in the spring, making her the first US senator to give birth while holding the office.

Numerous setbacks in her life didn’t keep her from serving the nation and for the welfare of war veterans and also for elimination of poverty.

Hats off to this ideological woman!