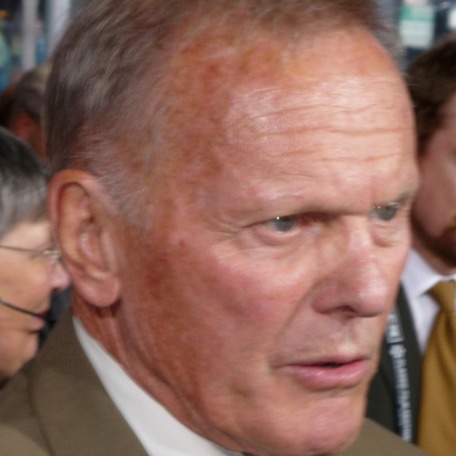 1950’s sensation Tab Hunter, with his tanned, blonde surfer-dude looks ruled the Hollywood for the decades. Rightfully called “The Sigh Guy”, he has managed to carve his name among the top listed actors in the film industry with an unerasable ink.

The blue-eyed hunk has not limited himself to acting only. He is a pop singer and author as well. The legendary actor has given many acclaimed films to the Hollywood.

This legendary actor was born in the year 1931 on the 11th day of June as Arthur Andrew Kelm. Born in New York to Charles Kelm and Gertrude Gelien, he is American by nationality. After his parent divorced, he resided with his mom and brother in California.

During teenage, he displayed great interest in figure skating and competed in singles & pairs. By the age of 15, he started to work as the U.S. Coast Guard. He has not revealed the details regarding his education.

Tab Hunter, a prominent name in the American acting fraternity came out clean through his autobiography entitled “Tab Hunter Confidential: The making of a Movie Star” in 2005, finally accepting the gay rumors that were being circulated since he kissed the fame. He was linked with his close friends Natalie Wood and Debbie Reynolds.

Before holding hands of his current partner, Allan Glaser, with whom he has already spent thirty years of his life, he dated Anthony Perkins and Ronnie Robertson. However, he is now committed to his partner and the couple has been living extremely happy life.

Started acting at age 19, Tab Hunter has a million dollar net worth

Tab’s captivating look and toned physique were enough to give a try to acting. Stars on his side, he was introduced to a famed agent who helped him fetch major film roles.

He signed his first major film “Island of Desire” starring Linda Darnell in the year 1952 and the credit goes to his handsomeness. Established as one of the top young romantic heroes from the movie “Battle Cry”, the directors managed to cash that fame, roping him into multiple romantic flicks.

Some of his hit movies include “The Burning Hills”, “That Kind of Woman”. “Gunman’s Walk” and “The Pleasure of His Company”.

Embarking on a singing career, he released his single “Young Love” which topped the musical charts for more than a month, establishing him as a promising singer.

His other popular singles include“Red Sails In the Sunset”, “Ninety-Nine Ways”, “Jealous Heart”, “Don’t Get Around Much Anymore”, “There’s No Fool Like A Young Fool” and “(I’ll Be With You) In Apple Blossom Time”.

In addition to this, he is a proficient writer. His autobiography, “Tab Hunter: The Making of a Movie Star” (2005) became the best-seller and re-entered the list of New York best seller in 2007. From the career spanning more than six decades, he has earned name fame and fortune. An owner of a ten million dollar net worth, he is a legendary actor.

Tab Hunter opened up about himself in a recent interview

In an interview with a reputed magazine, Hunter opened about his acting journey and the difficulties he faced after the initial stardom.

The down to earth and warm Tab faced issues in his personal life as well as he is never comfortable talking about his sexuality. The teenage heartthrob of his generation, he stands with a height of 5.9 feet.