Skip to content
Home » Entertainment » CEO of Google Sundar Pichai married his college girlfriend. More on his wife and parents

CEO of Google Sundar Pichai married his college girlfriend. More on his wife and parents 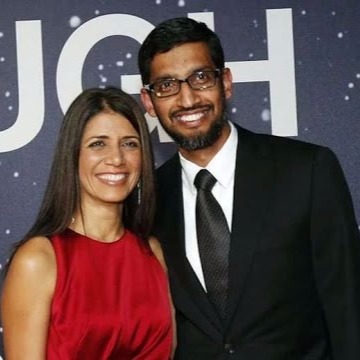 Sundar Pichai and wife Anjali Pichai are happily married. Smitten by each other in college, they got married when he was nothing more than a Stanford University graduate. Now, the enduring couple has two children: a daughter and a son.

Pichai, who was just a shy boy from Chennai, India, is now one of the most powerful men around the globe.  Now, he is living in San Francisco is away from his modest 2-room apartment, where he was brought up. In his middle-class family, it was his father, Regunatha Pichai who first understood his interest in technology. His father was an engineer earning about 30 pounds monthly.

Despite being a shy boy at his school, he topped the class at university which ultimately helped him win a scholarship at one of the world’s top universities, Stanford University. Yet, going there was difficult for him as his parents did not have enough money. His parents ended up withdrawing 1000 pounds – more than his dad’s annual income just to help him board the plane. His mom and dad sacrificed a lot to make sure their kids were educated.

The genius engineer met his future wife in college. Reportedly, it took few years for Sundar and Anjali to cover a journey from just friend to the loving couple.

They began sharing a romantic journey since their final year at IIT Kharagpur when he proposed her. Afterward, some financial challenges came in between the doting couple leaving them out of contact for several months when Sundar went to the US for further study. The long distance was a problem until Anjali also went to the US to study MS.

Finally, after Sundar was hired in a semiconductor firm, the couple decided to exchange the wedding vows. Currently, the loving couple shares two children.

With his university friends, he spoke fondly of his relationship saying that his rise to Google Chief Executive Officer was probably easier than expressing his feeling to his sweetheart.