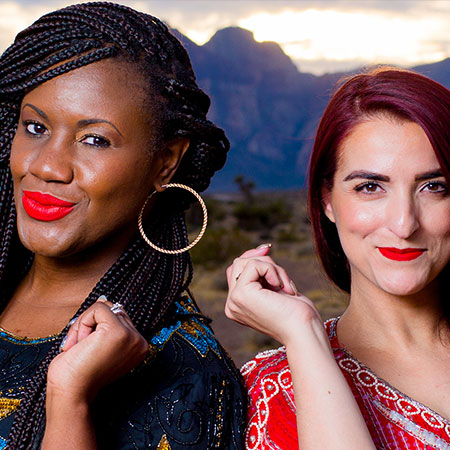 Shana Dahan, along with her high school bestie Edwina Registre, started their TV  career with the release of ‘Storage Wars,’ on Nov. 8, 2017.

The two met for the first time when Shana happened to sit next to Edwina on a bus which was headed to their High School Orchestra.

Though we don’t know where they met, we can assume that they met in France, because Edwina stayed in France until she was 18.

Edwina along with her parents toured around Europe before she moved to the states in 18 and joined the U.S army.

She studied Bachelor’s Degree in criminal justice and corrections from 2009 to 2012 in the University of Phoenix.

She probably left the army during this period and married her husband, whose name hasn’t been provided by the veteran.

Shana is married to Adam Kilbourn, the owner of Black Raven Studios, which helped Shana and Edwina shoot their highlight video.

The video caught eyes of an LA producer for ‘Storage Wars’ who sent a film crew to shoot the ladies.

The duo ran a fashion blog, colorblingblog.com, where they posted pictures of their outfits.

The BFFs also own a YouTube channel, Thrifters Anonymous which they started as a personal club to share their love for thrifting.

The two have over 33,000 subscribers on their channel and they regularly document their adventures out and about.

Though they are newcomers in the show, their unique vision for what they call “new vintage” has allowed them to spot treasures others might miss.

These beauties have attracted a significant number of fans through their charisma, and we hope to see more of them in the next season.