Everything about Vegas Rat Rods star Steve Darnell and Welder Up 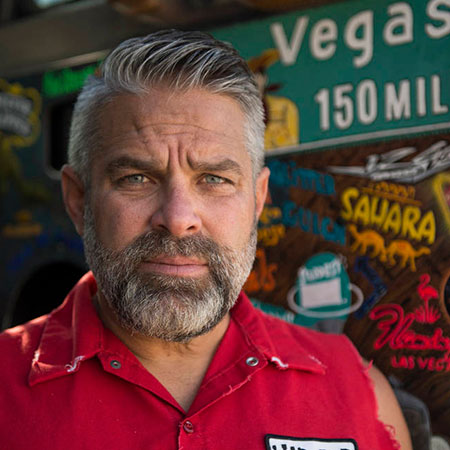 Steve Darnell is an American car builder and welder best known as the star of Discovery’s Vegas Rat Rods.

The show features Steve and his crew of misfits creating unique Mad Max-style rat rods at his Las Vegas-based shop, Welder Up.

Born and raised in the farms of Billings, Montana, he graduated from Skyview High School, where he was a part of the wrestling team.

His wrestling coach, Rich Malia recognized his talent and encouraged him to try out in the automotive world.

When Rich’s daughter wanted a bicycle for Christmas, instead of going to the store, he asked Steve.

Then, in 2002, he established his business, Welder Up, where he initially focused on fixing heavy machinery and agricultural equipment.

In 2008, he customized a car using some non-traditional methods.

He took a 5.9 liter Cummins diesel engine out of a Dodge Pickup and put it into a 1993 Dodge Sedan, finally creating a twin-turbocharged hot rod.

When he took the car to a car show, it attracted lots of attention and even made it to the Hot Rod magazine.

Afterward, he started receiving requests for custom cars, so, he changed his business model, and Welder Up became a hot rod business.

The idea of ‘Vegas Rat Rods’ was pitched after a Canadian production company approached him.

The show initially premiered on Discovery Channel’s Canadian network before it was aired in the US.

Started airing in 2014, the show became an instant hit receiving a good viewership and has since aired three seasons.

He has also won a number of honors, including a Fender Guitar signed by V.P. of Fender for his car which was the best at a show.

Steve has even made the props and cars for Five Finger Death Punch’s music video of ‘House of the Rising Sun.’

It has been reported that he charges somewhere around $90k for designing cars.