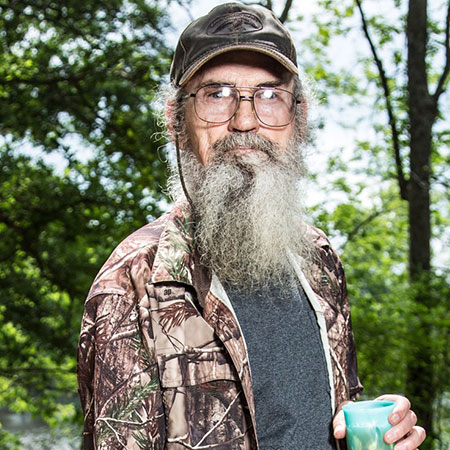 He has four brothers, Phil, Tommy, Harold and Jimmy Frank, and two sisters, Jan and Judy.

Si joined the U.S. Army during the Vietnam War after dropping out of Louisiana Tech University.

He retired from the Army in 1993 as Sergeant First Class.

After his retirement, he found employment at Duck Commander, his brother, Phil Robertson’s business.

His work at the Duck Commander was to fashion the reeds that are inserted in all the patented duck call.

He was nominated for 2013 Teen Choice Award for Choice TV: Male Reality/Variety Star for Duck Dynasty.

Apart from Duck Dynasty, Si has appeared on shows like ‘Buck Commander,’ ‘The Duckmen of Louisiana,’ ‘Going Si-ral,’ and has guest starred on ‘Last Man Standing.’

He started a band called Uncle Si and The Sicotics along with his daughter-in-law, Marsha Robertson, and Bridgette Tatum.

As of 2018, Si has accumulated a lucrative net worth of $8 million.

He married his long-time girlfriend, Christine Robertson in 1971. Together, they share a son, Scott and a daughter, Trasa and have eight grandsons.