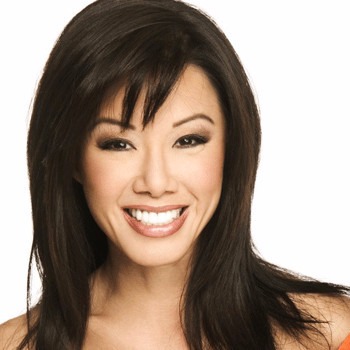 Attractive Singaporean-American media figure, Sharon Tay is the news anchor and host of MSNBC Network. The stunning lady, who has already reached  49 years of age, has established a distinctive fame in the journalism industry winning numerous prestigious awards including Emmy (5 times) and Associated Press Award (3 times).

Born on 15th October 1966, Sharon spent initiate seven years in her native land Singapore as her family emigrated to the US and settled in Connecticut for few years prior to relocating to the Philippines.

Completing her sophomore year at International School, she returned to the US, where she completed her high-school level at a boarding school in Massachusetts. Afterward, she achieved Bachelor of Science degree from the Boston University, majoring in Broadcast Journalism and minoring in International Relations.

Sharon’s first major break came when she wrote, anchored and produced the weekend news show for a local cable station in Boston. In 1993, she was hired by KCCN-TV (now KION) as  consumer investigative reporter and general assignment reporter. Later, she was recruited by Tribune Broadcasting as a general assignment reporter for KTLA-5 Los Angeles. She went to be a weekend anchor and finally an anchor for early morning news edition at the station. She left KTLA for MSNBC in 2004.

Singaporean-born American anchor Tay hasn’t opened up to the public regarding her personal and love life. It’s hard to believe that this lady with the height of 5 feet and 3 inches & body measurement of 33-24-35 inches has never been on a romantic date with any guy. Probably, many men are smitten by her elegance. However, her love life remains a mystery until she speaks about it.

Her stunning looks in TV is hardly believed to be a natural one. Reportedly, she went under the knife to enhance her looks. Apparent changes are seen on her face, especially on her nose. Most probably, Tay has experienced Botox or fillers injection and Rhinoplasty procedure.

The numerous times awarded journalist Sharon Tay is currently associated with KCBS-TV and KCAL-TV since 2007.