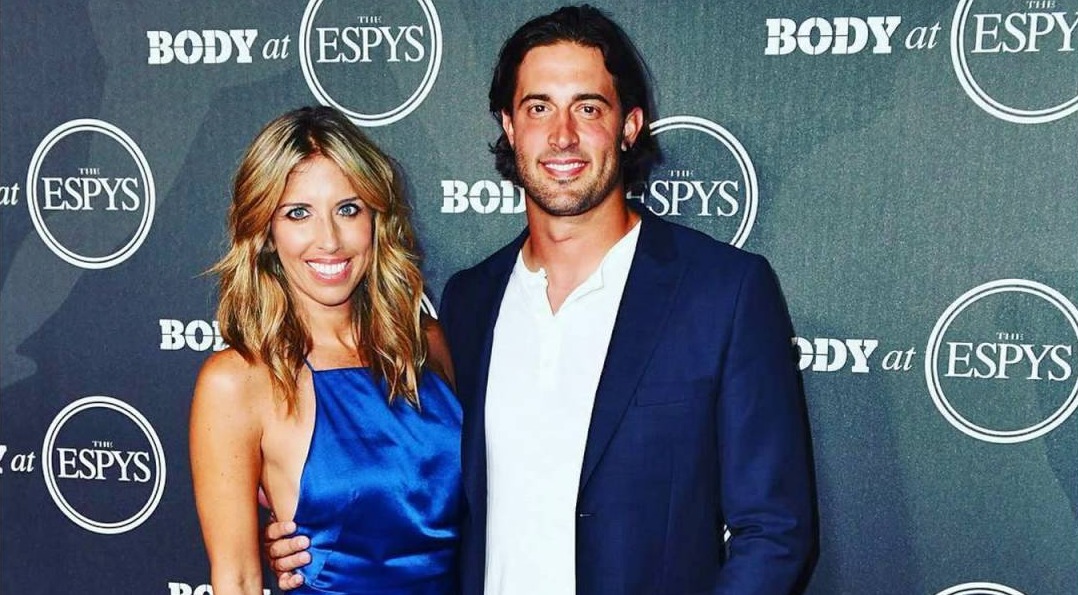 Sara Walsh & husband Matt Buschmann’s married life resembles a romantic fairy tale. Together for three years and parents of twins, Sara and Matt have a beautiful relationship often subject of envy to many. Bear with us, as we take a dive into the couple’s life.

Amazing beginning of Sara Walsh and her husband’s story

You want to know how Cupid works in real life, ask ESPN sportscaster, Sara and Matt.

It all began when Sara Walsh was designated to interview David Prince, a Paralympic bronze medalist. When Matt learned the interview was going to happen, he asked his good friend David to pass a hello to Sara. After Sara knew Matt’s attraction towards her, she was not hesitant to let her guards down. David put a few good words of Matt and that really helped. 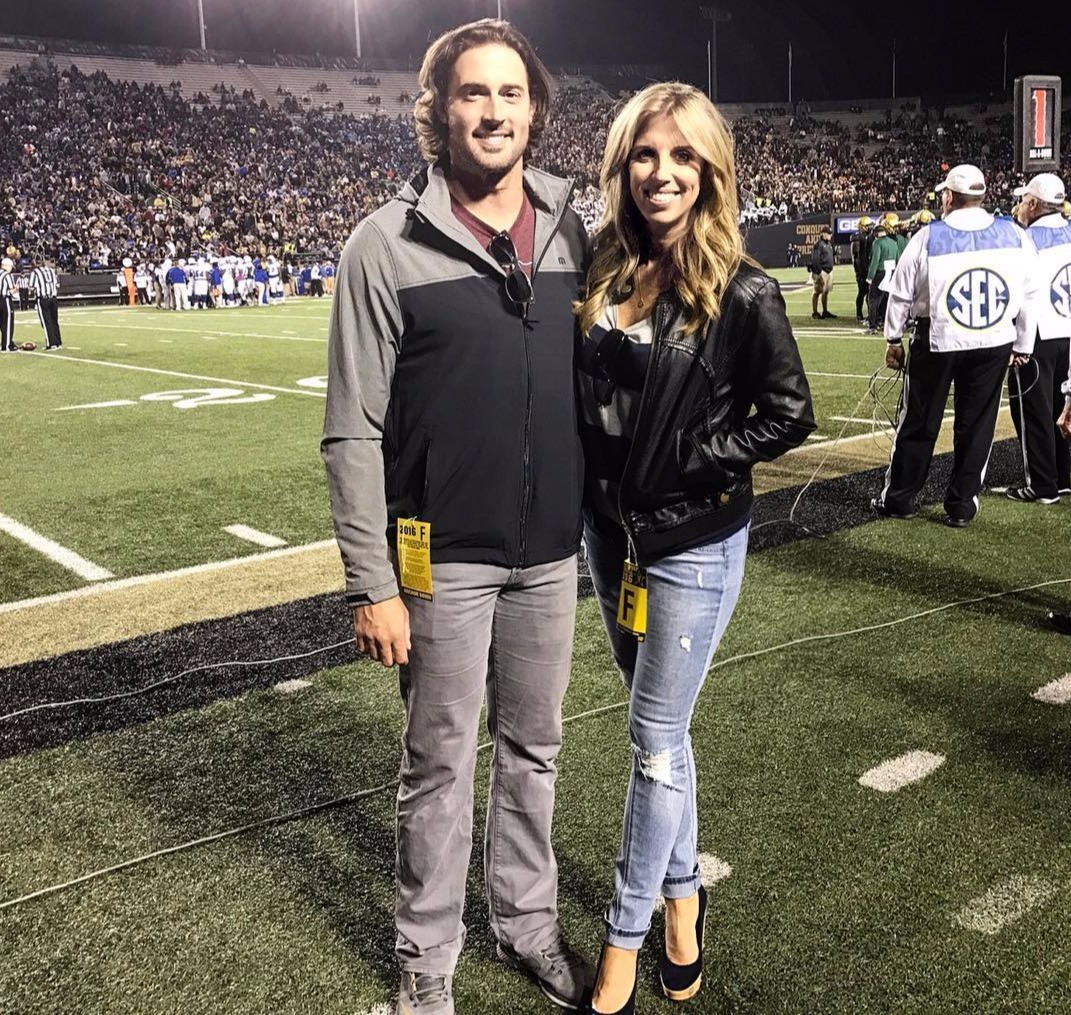 Recalling the first days of their relationship, Matt shared interesting details to fans in an interview. Matt had a dilemma when he asked Sara by David. He said

Like any other guy, I spent an hour trying to construct the greatest, most intelligent, funny line that you would imagine her sitting there laughing

After an hour, he still managed to send a simple text which read like this: “Well hello there Sara, it’s been a while since the good ole days in Nashville”. After a few texts back and forth, the two became close friends and started dating in 2012. After dating for two years, the couple got married in 2014.

Sara and Matt are in the seventh heaven with twins’ arrival!

The couple’s bond got even stronger when they welcomed the twins Hutton and Brees in the fall of January. Sara shared the babies’ pictures first time on Instagram on February 4, nearly a week after birth. Both of the proud parents are often taking to social media to share the cute photos of their bundle of joys.

Before the babies arrived to enlighten their paradise, Sara attempted in every possible way to hide her pregnancy. 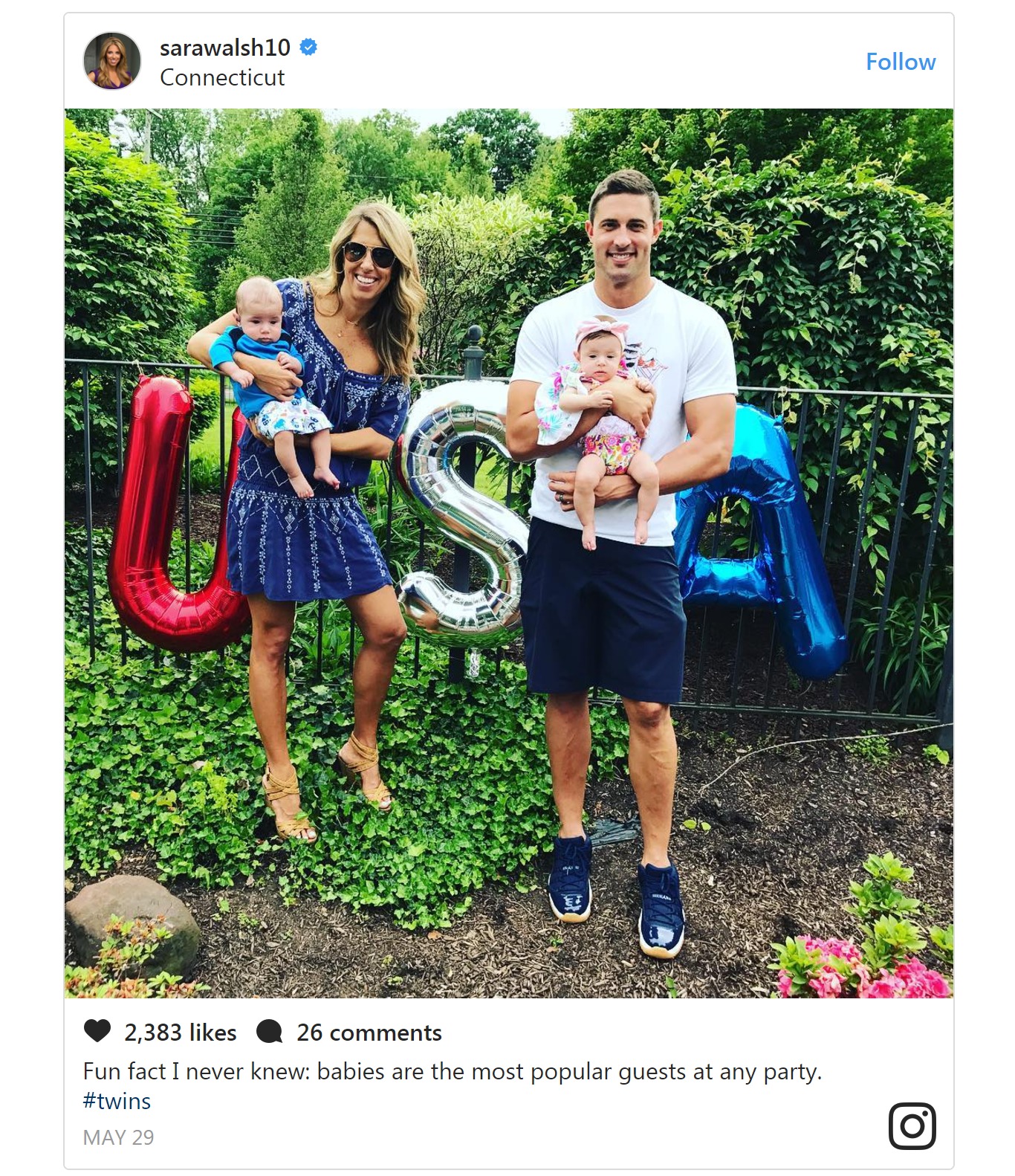 Many of us may be unknown to one heart-wrenching fact of Sara and Matt’s personal life. Sara revealed after months of the kids’ birth about her on-air miscarriage she faced years ago through a lengthy Instagram post on Mother’s Day, 2017.

During the time, she was hosting SportsCenter from the University of Alabama and Matt was in the middle of his game. She was three months pregnant, while she experienced an on-air ordeal. Already had three failed pregnancies, though one happened in the middle of her sports hosting job, she and husband kept it secret.

Even after a day of having an operation, she joined her work the next day. She did this to not drawing attention to their condition. Not only that, they didn’t even announce their latest pregnancy, because they weren’t sure that they would be able to have this wonderful experience as parents ever. 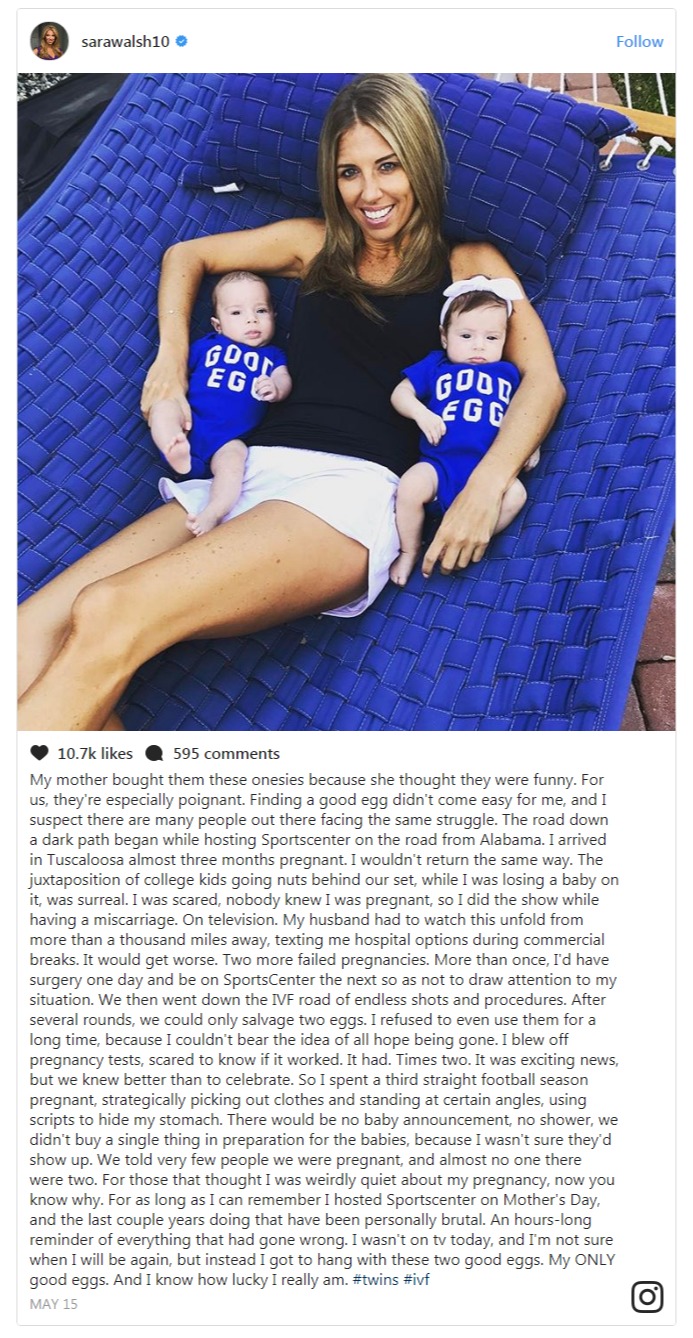 Eventually, everything turned opposite, nothing happened like they feared would happen. Now, they are blessed with two. Thanks to IVF. The lovely couple is living their dreams, which they had nearly given up after three failed attempts.

There have been no rumors about divorce or relation of the pair outside the marriage. The twosome’s love life continues to prove the bond of true love.

Sara Walsh suffered a setback in career: Got fired by ESPN

Sara Walsh, however, suffered a blow in her career just a few months after the birth of her twins. Sara was planning to return from the maternity leave when she announced on Twitter that she had been fired by ESPN. She was fired in a barrage of layoffs by ESPN which also included big names like Trent Dilfer, Ed Werner and Andy Katz. 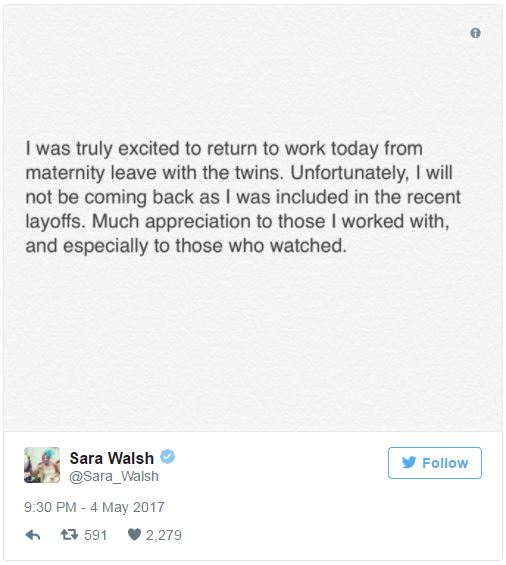 Approx. 5 feet 10 inches tall journalist also makes the round of the media due to her hot appearance on the show especially her slender legs. A former soccer player at the University of Florida, Sara has an amazing body, which she flaunts in the beautiful dresses. However, she hasn’t shared even a single picture of herself in bikini or swimsuit.