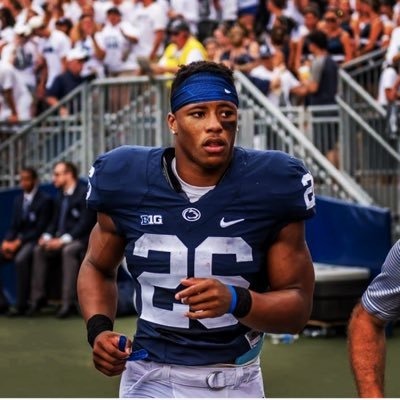 Saquon Barkley is currently in relationship with a college girl named Natalie Saraceni. She lives in Whitehall, Pennsylvania State. Saquon is just beginning his career, so no rumours have marriage come out yet.

Saquon was a football passionate person since the very early age.

Saquon Barkley is a college footballer yet

Saquon Barkley started off his early career in the American football as a high schooler at White Hall High School. In the school years, he has been rated four stars in football. This got him into Penn State University’s college team.

Saquon went to Penn State recently in 2015. Since then, he has always been able to make it to the starting squad. In October 2015, Barkley missed two games after suffering a minor injury.

The sophomore year at Penn State has been more fruitful for Saquon. On November 1, 2016, he was announced as one of the semi-finalists for Maxwell Award. Likewise, in 2015, he had been awarded Second Team All-Big Ten, BTN.com Freshman of the Year, 2x Big Ten Freshman of the Week and Sporting News and USA Today Freshman All-American.

Saquon Barkley’s baseball stats have been amazing so far. These stats, if consistent until the end of the college days, will land him in a lucrative baseball team.

As a freshman at Penn State, Barkley made 182 carries for 1076 yard and had 7 touchdowns. Likewise, in the second year, he pursued some career records. The first game rush for Barkley was 105 yards against Kent State.

In the second week, Saquon made a career high of five touchdowns in a week. Recently, on 5th November, Barkley performed very highly with 211 all-purpose yard rush and 41-14 win against Iowa.

Saquon Barkley is just 19 years old, but he is around 6 feet, or 1.8m, tall and weighs 101 kilograms. These usually tend to be the measurements of a professional adult footballer. Hence, Saquon is reportedly being referred to as the budding star of the next generation football.

Saquon even got a letter from the President of Offense-Defense Sports requesting him to commit as the Running Back for the 2015 Offense-Defense All-American Bowl. These feats have made him quite popular on internet as well. Saquon Barkley has 19.9k followers on Twitter and 31.4k followers on Instagram.