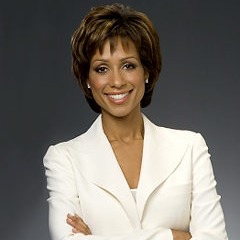 Sade co-anchors the channel’s one of the highest-rated weekday shows called Eyewitness News. Similarly, she has served as an invaluable part of WABC since 2003.

A middle-class family of African American descent adopted Sade Baderinwa after her birth parents abandoned her when she was a kid. Like her biological parents, her adoptive parents are also unknown to the media. She has German and Nigerian roots from her birth parents.

Raised in her hometown, Baltimore, Sade received her college education from the University of Maryland, College Park. After graduating from the university, she kicked-start her professional journey by getting enrolled in a Maryland-based TV network called WBAL-TV. She worked for the television channel for nearly three years.

Is Sade Baderinwa married? She allegedly had an affair with Martin O’Malley.

Leaving WBAL-TV in 2003, Baderinwa became a part of WABC-TV, the broadcasting station of the ABC television network. As she joined the station, she replaced journalist Roz Abrams who left the station to begin working with WCBS-TV.

Net worth and Return to television after 2004 accident

Sade Baderinwa has remained connected with WABC-TV for more than a decade. So fans assumed that she receives a handsome salary from the channel. Moreover, Baderinwa owns an approximated net worth of $5 million also suggests that her paycheck is vast.

Needing to take a break from reporting duties due to an accident, Baderinwa could not appear on television from 23 July to 13 December 2004. Upon returning, she continued co-anchoring the noon broadcast of Eyewitness News. Sade Baderinwa is still a co-anchor of Eyewitness News but the 5 p.m. version. Journalist Diana Williams accompanies her on the program.

Sade is also co-anchoring the 11 p.m. news broadcast alongside journalist Bill Ritter. She got the opportunity to fill in the news show in May 2011 when its co-anchor, Liz Cho, left to fill in the 4 p.m. newscast of the same channel.

Apart from appearing on the 5 p.m. and 11 p.m. broadcasts of WABC-TV, Sade has made a guest appearance on one of the talk shows on ABC called The View.

As of 2022, Sade Baderinwa, the fifty-two-year-old journalist, remains single. Thus, no news of Sade getting married ever came to the surface. Besides, the reporter enjoys her unmarried life.

What’s more, Barderinwa focuses all of her time on her career. Likewise, Sade refrains from sharing anything about her love life on her Instagram.

Sade also keeps all of her past affairs hidden from the public view. And so, the names of Baderinwa’s ex-partners remain elusive as her past.