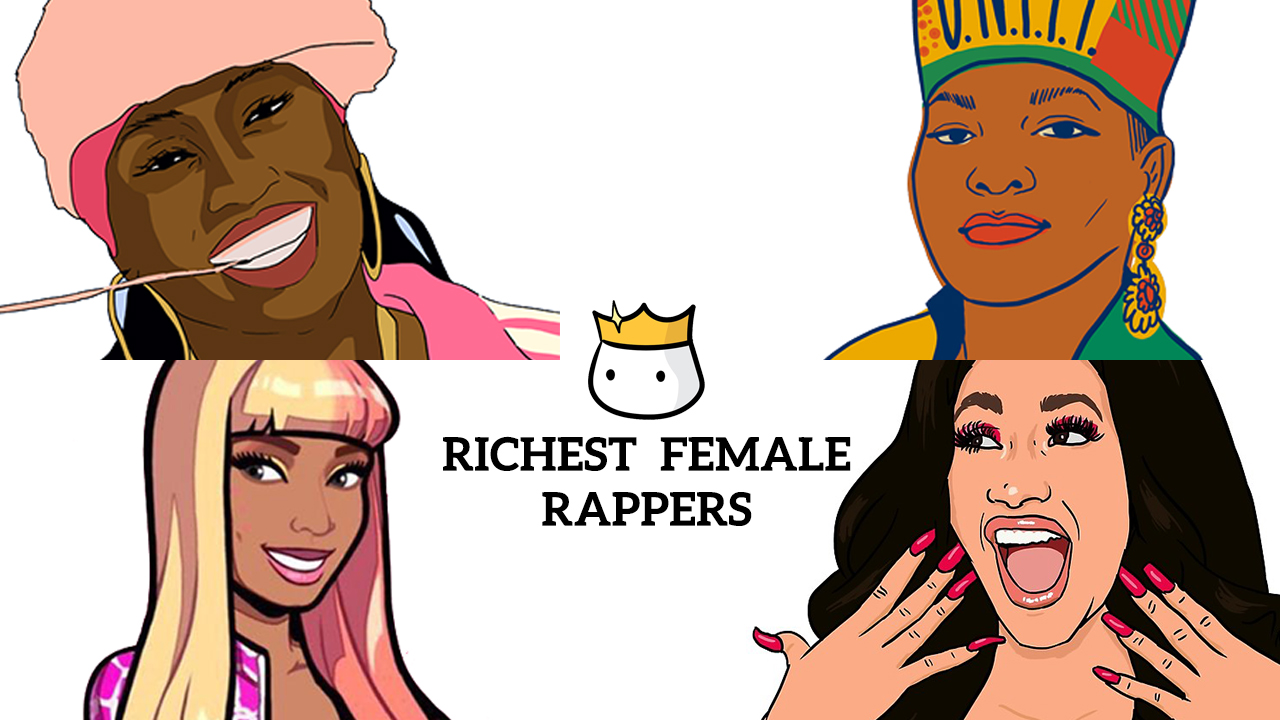 With artists like Jay-Z, Kanye, and Eminem bringing out the greatest hits of all time, rap was mainly defined and ruled by male artists. But with rappers like Cardi B., who won a Grammy for Best Rap Album, female rappers are here to break the “boys club.” So how are the Richest Female Rappers? Keep reading to find out!

10. MC Lyte, one of the Richest Female Rappers

Lana Michelle Moorer, professionally known as MC Lyte, has been on the rise since the late ’80s became the first solo female rapper to release a full album, Lyte as a Rock. Her songs, Ruffneck and Ride With Me, were both nominated for a Grammy Award.

Apart from that the 49 years old MC has also been featured in TV series, including In Living Color, Moesha, and Cousin Skeeter. Being one of the first female rappers to break the misogyny that ran in hip-hop, MC Lyte has an estimated net worth of $8 million as of 2020.

9. Eve and her millions of Dollars

She is popularly recognized for her singles Let Me Blow Ya Mind, Who’s That Girl, Gangsta Lovin and Tambourine Eve Jihan Jeffers Cooper. Eve is only the second female rap artist to debut an album at no.1 on the Billboard 200.

Eve is known for her role in the film, Barbershop and The Next Cut. She is also on the CBS Daytime talk show, The Talk. With over 13 million of her first three albums being sold worldwide, the 41 years old rapper has a net worth of $10 million as of 2020.

8. DJ Spinderella, one of the Richest Female Rappers

Deidra Muriel Roper, known as DJ Spinderella, has produced several award-winning songs for her hip-hop group, Salt-n-Pepa. Salt-n-Pepa later became one of the most prominent female rap groups selling over 15 million albums and singles worldwide, and at least six singles were certified gold or platinum.

Mathangi Arulpragasam, known as M.I.A., came to fame for music with sounds of rare instruments, electronics, and unusual sound samples. Her second album Kala was certified silver in the UK and gold in Canada and the US.

In the 2019 Birthday Honors, she gained an appointment as a Member of the Order of the British Empire for her services to music. The 44 years old rapper has a net worth of $ 14 million as of 2020.

6. Cheryl James counts as one of the Richest Female Rappers

Cheryl James, aka Salt, is widely recognized for being a member of the Grammy Award-winning female rap trio, Salt-n-Pepa. Along with her band-mates, she starred in the reality TV series The Salt-n-Pepa show on VH1.

5.  Sandra Denton owns millions as her net worth

Sandra Jacqueline Denton, better known for her stage name Pepa was a member of the famous trio Salt-n-Pepa. Salt-n-Pepa released five studio albums, achieving Gold or Platinum status. She also starred in The Salt-n-Pepa show along with her band-mates.

To accommodate her book, Pepa released her autobiography, Let’s Talk About Pep. She launched her social network for her fans. She has also appeared on the TBS sitcom, Are We There Yet? Fifty-year-old Pepa has a net worth of $15 million as of 2020.

4. One of the Richest Female Rappers, Cardi B.

Belcalis Marlenis Almánzar, popularly known as Cardi B., is one of the most influential female rappers. She has earned three number-one singles on the Billboard Hot 100. Her single I Like It made her the only female rapper to attain multiple number-one songs on the chart.

Melissa Arnette Elliott, Missy Elliott, is the first female rapper to get into the Songwriters Hall of Fame. Her single Work It won her a Grammy Award for Best Female Solo Performance. She has sold over 30 million records in the US.

In 2019 Missy received an honorary Doctor of Music degree, Michael Jackson Vanguard Award, and Women’s Entrepreneurship Day Music Pioneer Award. The three-time Grammy Award winner has a net worth of $50 million as of 2020.

2. Queen Latifah, One of the Richest Female Rappers

Fans also recognize Dana for her acting skills. She has starred in several films, including, Set It Off, Juice, and Stranger than Fiction. Her music and her TV career have earned her a Grammy Award, an Emmy Award, and a Golden Globe Award. She also received a star on the Hollywood Walk of Fame in 2006. The 49-year-old has a net worth of $60 million as of 2020.

Queen Latifah married to anyone? Who’s her husband?

Onika Tanya Maraj-Petty, aka Nicki Minaj, fans called her one of the most influential female rap artists and dubbed the “Queen of Rap” by the Media. She has earned four top-five on Billboard Hot 100 with singles, Super Bass, Starships, Bang Bang, and Anaconda.

She has received numerous awards, including six American Music Awards, eleven BET Awards, four MTV Video Music Awards and four Billboard Music Awards. With over 30 million singles and 5 million albums sold worldwide, she owns a net worth of $80 million as of 2020.

These millionaire rappers have accomplished a lot in money, name, and fame. We can’t wait to see who will gain a slot on the list next year.