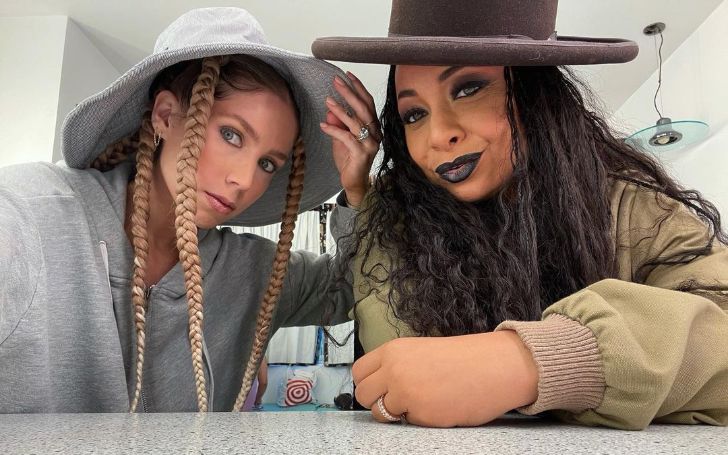 Raven-Symoné came to fame at an early age; moreover, she played in the hit Disney show That’s So Raven. Besides, she mostly did the RnB genre. Likewise, she signed with multiple labels, including MCA, Walt Disney, etc.

Things went pretty well for the Disney star during her early days. However, Symoné did experience her fair share of controversies. And in this article, today, read about a handful of her so-called adventure in life.

Who is Raven-Symoné? How old is she?

Raven-Symoné came to fame as Raven Baxter at an early age. Furthermore, she was only 14 years old when she first appeared in the show, That’s So Raven. And as of 2022, Raven is thirty-six years old. Likewise, Reven-Symoné Christina Pearman-Maday was born on December 10th, 1985. Similarly, she drew her first breath in Atlanta, Georgia, USA.

Symoné was born to Lydia Symoné neé Gaulden and her husband, Christopher Symoné. The actress tasted fame even as an infant. What’s more, Raven modeled for many local ads. Moreover, Symoné worked at Atlanta’s Young Faces Inc. Modeling Agency. Besides, Raven holds an American nationality and comes from a black heritage.

Raven didn’t grow up as the only child of her parents. Moreover, she and her family welcomed a son named Blaize Symoné. However, her younger brother, Blaize, likes to live away from the limelight.

Started Acting at the age of Three

Raven first auditioned for a role in the movie Ghost Dad. However, because of Symoné’s age at the time, she wasn’t selected. Regardless, Bill Cosby liked the young actress so much he managed to find a role for Raven in The Cosby Show.

Is Raven-Symoné Married? Is Raven a lesbian?

Yes, Raven-Symoné is a married woman. And yes, Symoné is also a Lesbian. What’s more, she married Miranda Maday back in 2020. Furthermore, the lovebirds exchanged their vows on June 16th, 2020, and an intimate ceremony.

Raven and her life partner currently lead a wonderful married life. Besides, the actress regularly posts pictures and videos with her partner on her social media. But, the married couple hasn’t welcomed a child yet. Moreover, it looks like the actress and her wife want to focus on their careers for now.

Before marrying, Symoné used to date the actress AzMarie Livingston. Furthermore, Raven and her ex-girlfriend started dating back in early 2013. However, the couple later decided to end their relationship in 2015.

Molly Sims drank from the cup Raven spit in

Humans are prone to make mistakes in their lives. And Symoné made a slipup in live TV. Furthermore, Raven was co-hosting The View when it occurred. Raven and her co-star Molly Sims talked about the benefits of saltwater, but the taste was something the actress did not expect. And so Raven’s Home star spit the water back in the cup. It went unnoticed by Molly, and she later drank from the same cup Raven spit in.

How rich is Raven-Symoné? Learn about her net worth

Raven-Symoné, the thirty-six-year-old actor, has earned a fortune from her career. Furthermore, Symoné currently holds an approximated net worth of $55 million. What’s more, she made her living as an actress and a singer.

And currently, Raven earns as the lead of the sitcom Raven’s Home. What’s more, she earns thousands of dollars per episode of that show. Besides, Symoné and her wife lead a life in comfort thanks to her income.