Picture perfect married life of Alison Sweeney and husband David Sanov, learn the secret behind it. Discover her net worth too 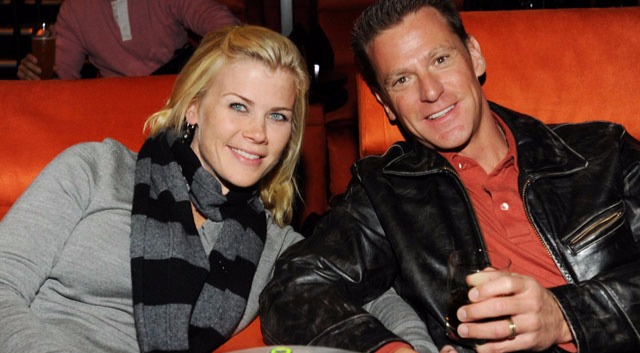 Alison Sweeney is living a perfectly happy family life accompanied by her loving husband, married since 2000 and their two children. American actress owns a net worth of $9 million and major credits go to whopping paychecks of $45 thousand she receives per episode hosting the reality show The Biggest Loser.

Married since 2000, Alison and her husband’s relationship have been quiet and peaceful. As per multiples sources, on-screen Sami and David tied the knot after dating for three years.

The lovely duo parent two children together including a 2005-born son named Benjamin and a 2009-born daughter named Megan. The cute small family is residing in Los Angeles.

Though her famous on-screen character Sami is known for struggling with numerous hardships and hurdles in relationships with her man and her kids, everything is just opposite in her real life.

Her real life seems quite happy. Alison and David seem to have maintained strong bonding with one another and have supported each other long the years together, professionally and personally.

In contrast to her famous reel life role, she is rather lovable & family oriented. In an attempt to keep their marriage fresh and alive, they celebrate their anniversary every year. In an interview, the Days of Our Life star said: “Every year on our anniversary, we have a dinner date and talk about how our relationship is going”.

Got an exposure to a camera since an early age of five, making an appearance in an ad for Kodak, Alison later played in an episode of American horror series Tales from the Darkside. Her major acting career began when she left the University of Los Angeles California to appear in Days.

Throughout her career, she is best known for portraying the character of Samantha “Sami” Brady that she played in NBC series Days of Our Lives. Receiving numerous awards and nomination including Daytime

Emmy & Soap Opera Digest Award, she began as a host of the TV series The Biggest Loser in 2007 and served till 16th season’s finale of the show in 2015. She was paid $45 thousand per episode that summed up to add several dollars to her net worth.

Both the personal and professional life story of Alison Sweeney portrays good examples of a successful woman. Happily married with her sweetheart-turned-husband David Sanov, Alison Sweeney has accumulated a net worth of $9 million all through her showbiz career spanning over three decades.