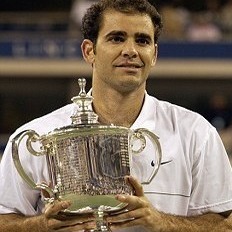 Former World’s best tennis player, Petros Sampras famous as Pete Sampras is listed as one of the great+est tennis players in the history of the tennis world. Since making the professional tour the debut in 1988, he has achieved great achievements in his career.

In his successful tennis career, he has won 14 titled which includes 7 Wimbledon, 5 US Open and 2 Australian Open. Pete was first tennis player to break unbreakable record of 12 Grand Slam Single title of Roy Emerson.

One of the best tennis players in history, Pete Sampras was born on 12th August 1971 in Washington, D.C., United States of America. Since an early age, he was proving that he has an unbelievable athletic passion towards tennis. By reaching to the three years of age, he found tennis racket in his house with whom he started practicing by hitting the ball against the wall.

He has idolized Rod Laver. When he reached 11 years of age, he met his idol and got the opportunity to play with him. Pete’s tennis skill became more polished when he joined Jack Kramer Club. In his early days, he was coached by Peter Fischer.

Pete’s first Grand Slam win came in September 1990 at US Open. He held the title by defeating 4th rank, Agassi. He was 19 years and 28 days when he grabbed his first Grand Slam title. In 1992, he made a place to the semi-final and finished as runner-up at US Open. Following a year, in 1993 he reached to World No. 1 rank first time in his career. That same year, he also claimed his first Wimbledon title by defeating former World No. 1 Jim Courier. His good form continues as he won first Australian Open title in 1994.

He was showing off his best form of his career until 2001 when he lose to Roger Federer in the 4th round. That same year, he became successful to make a place in the final of US Open but he was defeated by Lleyton He went in the finale. His bad day in Wimbledon continues next year in 2002 as well when he made early exit losing to George Bastl in the 2nd round. The same year, he took retirement from tennis world playing the last match on 8th September 2002.

Pete Sampras’s parents were actually from Greece. He has an elder sister named Stella Sampras who is women’s tennis head coach of the University of California. He also has a younger sister named Marion who works as a teacher in Los Angeles. Likewise, his elder brother Gus has worked as tournament director at Scottsdale ATP event.

Renowned tennis player, Pete Sampras is married to beautiful American actress, Bridgette Wilson. He got wed to Bridgette on 30th September 2000. From his marriage life, he has two sons named as Christian Charles Sampras and Ryan Nikolaos Sampras. Currently, he is spending a blissful moment with his family in Lake Sherwood, California.

Although Peter Sampras has taken retirement, he is still connected to tennis by playing several exhibition matches.