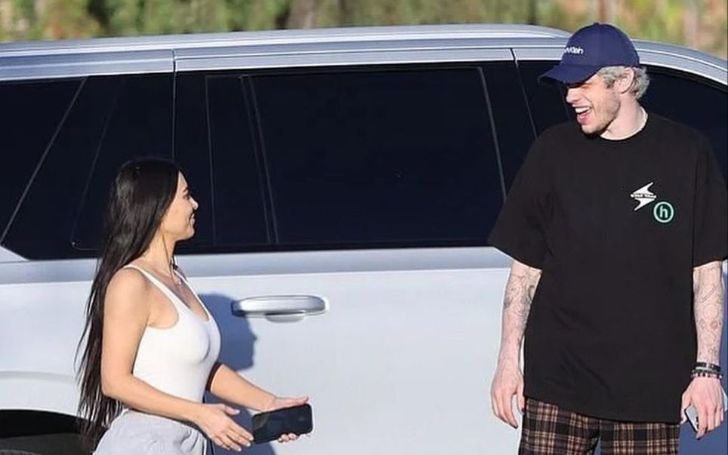 Kim Kardashian filed for divorce in Febuary of 2021, after seven years of marriage with Kanye West. The couple has four children together, but the fans were not surprised when they split. However, fans were stunned when E! News reported that Kim is dating SNL star Pete Davidson.

Despite this, fans still think the couple can get back together after Kanye bought a $4.5 million home across the street from Kim Kardashian. But, the Kimye fans were disappointed when the judge granted permission to change Kim’s legal marital status to single on March 2, 2022.

How did Pete Davidson and Kim K meet?

Kim Kardashian impressed viewers when she hosted the SNL as she hilariously poked fun at herself and her family. Fans were caught off-guard when Pete and Kim kissed during an Alladin sketch. Although the couple knew each other years before, they were never close.

Dating rumors started when the pair were seen holding hands on Rollercoaster at Knott’s Scary Farm. After several date nights in New York and Staten Island, the dating rumors were finally confirmed.

Pete Davidson and Kim Kardashian went to the movies and even The Bahamas. The couple seems to be genuinely happy together. The Kardashian-Jenners have shown a lot of support for the couple, and it’s safe to say Pete’s in their good graces.

It is no secret that the rapper is not a fan of Pete Davidson dating his ex-wife. Kanye made it clear that he was not ready to give up on his marriage. During a performance of his song Runaway, Kanye attempted to get Kim back.

“I need you to run right back to me,” West rapped, adding, “More specifically, Kimberly.”

Kanye West has made his resentment for Davidson clear through various Instagram posts and tweets. The rapper made threats, called the relationship between the influencer and comedian a lie, and has also taken shots at Pete’s ex, Ariana Grande.

While the couple ignores Kanye’s attack on their relationship, Pete seems to have had enough. The comedian was back on Instagram and posting about his upcoming movie, the home. However, Kanye West’s fans flooded the comments, calling Davidson a ‘SKETE’ (Kanye uses to describe Pete as a homewrecker), leading Pete to delete his Instagram account.

Is the relationship serious?

While the couple is happy and is going out with each other, none have talked about how serious they are. But, Pete and Kim are still going strong despite attacks from Kim’s ex-husband and his fans.

Hopefully, the rapper will move on, and the couple can entirely focus on their relationship. What’s more, Kanye’s obsession with his former wife brought a lot of eyes to the celebrity. On the other hand, Kim and Pete try and move past the rapper’s online harassment.

Given how dedicated Pete seems to the relationship, we can see that the couple could lead a serious relationship. Furthermore, Pete, who kept away from the social media world, recently joined Instagram after the relationship. However, after seven days of creating his IG profile, Davidson later deleted his account.