Skip to content
Home » Entertainment » How much is Biker Build-Off’s Paul Yaffe’s Net Worth? 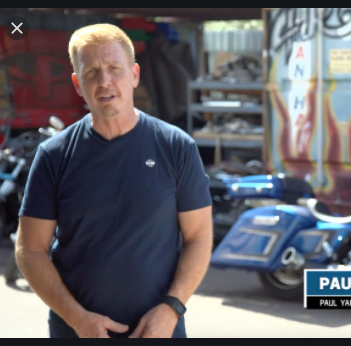 Paul Yaffe is a legendary biker, who has been building the most sought-after motorcycles, parts, and accessories for over 25 years.

Today, he has dominated the custom motorcycle scene in Arizona, and his unique style and innovations have set an industry standard.

Growing up in California, he spent part of his youth riding a skateboard to local bike events so he could see some of the customs bikes and hang out with riders.

His childhood passion for motorcycles led him to join Motorcycle Mechanics Institute in Phoenix, where he graduated with the top ranking.

In 1991, he partnered with his two friends and founded American Legend Motorcycle Company.

A year later, they started a parts manufacturing and distribution arm “Beyond Bolt-on.”

In 1994, Paul bought out his partners and changed the name of the company to Paul Yaffe Originals.

In 2006, he opened his second company, Paul Yaffe’s Bagger Nation.

The company has been providing all the custom parts and services to turn a Harley-Davidson touring bike into a custom bagger without compromising ride quality and reliability.

The legendary builder and his customs bikes have been featured in hundreds of magazines in the US and abroad.

He participated in Discovery’s ‘Biker Build-Off’ against Indian Larry in 2003, and against Dave Perewitz in 2006.

He was featured in History Channel’s 10-episode series, Biker Battleground Phoenix in 2014.

He made his fame in the 1980s and 1990s with choppers and later with baggers.

He celebrated his 25-years of bike building during Arizona Bike Week in 2016.

He is commissioned to create about 12 projects annually. Each completed projects are unique.

He has garnered a net worth of approximately $5 million.

He is the featured builder in an Art of the Ride, a motorcycle-themed exhibition at the Phoenix Airport Museum, running until May 2018.

He is married to a woman named Suzy and has a son, Nash Yaffe with her.

The couple has also been parenting Suzy’s two grown kids: Ryan and Sarah.