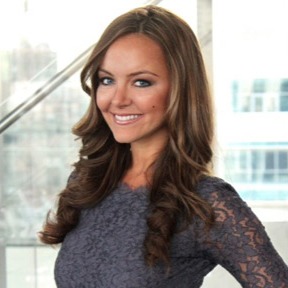 Nicole Lapin is one of the youngest anchors at CNN and CNBC. She was a full-time anchor at CNN for four years and for two years at CNBC. She is also an author of the New York Time’s Best selling Book ‘Rich Bitch’.

Born on March 7, 1984, Nicole commenced her career as a correspondent at CBS stations in Kentucky and Soth Dakota. She worked as an anchor in CNBC’s global business news program ‘Worldwide Exchange’ becoming the youngest anchor in the network’s history. She also contributed financial reports to MSNBC and Today. She has anchored major events like the 2008 Presidential election and the Virginia Tech massacre.

Nicole launched CASH Smartwatch with her retail partner HSN in 2014. She has appeared on the cover of Power Girls Magazine and Eliza magazine. She received the 2008 ‘Power 30 under 30’ Award. After leaving CNBC, she launched her own financial news production company ‘Nothing but Gold’.

The anchor also tried her hand at writing and became the author of New York Time’s best-selling book ‘Rich Bitch’ which guides us to control our own finances in order to get what we want, with some of her experiences, knowledge, and mistakes she shared in her book. She has an estimated net worth of $2 million. She is the first female ever to win the Best Money Expert Competition.

Born and raised in Los Angeles, Lapin belongs to a Jewish family. She is the daughter of a scientist and a former Miss Israel. She received her BA degree from the Medill School of Journalism at Northwestern University.

Nicole was rumored to have dated Twitter founder Jack Dorsey which was never confirmed. But possibly, she was in a relationship with Brian Stelter who also happens to be a journalist.

Presently, she is married to billionaire GSI Commerce founder and CEO Michael Rubin. Rubin was previously married. He married Lapin in 2011, a month after he divorced Meegan with whom he has a daughter. Lapin and Rubin are now happily living together in Union Square. They don’t have children together.

Nicole Lapin is currently a CNBC anchor where she interviews highest ranked personalities like CEOs and politicians. She is a smile ambassador for Operation Smile and an ambassador for Points of Light. Lapin serves on the all-female board of Women in Need. You can follow her on her Instagram and Twitter.