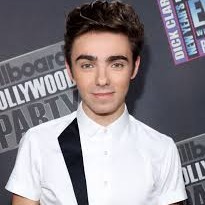 As the member of a highly praised U.K. boy band, ‘The Wanted’, Nathan Sykes has shared familiarity to the music world since years. Starting through the traditional pop music audition process, Nathan, the 23-years-old young pop music artist, who has already stayed in the heart of worldwide young fans, began displaying his natural musical talents at a very tender age of six.

As Nathan James Sykes, he was born on 18th April 1993 in Gloucester, England, the United Kingdom to parents, Harry and Karen Sykes. Brought up with a younger sister, Jessica, both of them grew up to be singers.

As a little boy fascinated by music, he attended Sylvia Young Theater and then Ribston Hall High School Sixth Form. Starting to sing at an early age of six, he won the various competitions including Britney Spears’ Karaoke Kriminals & Cheltenham Competitive Festival of Dramatic Art in 2003.

He attempted to represent the UK in Junior Eurovision Song Contest 2004. Performing the song ‘Born to Dance’, he was placed third in the finals. In 2008, he also performed in the music competition ‘Live and Unsigned’.

In 2009, Nathan auditioned for a boy band named ‘The Wanted’ as a teenager. Jayne Collins chose him to be one of the five members of the group. He joined others Siva Kaneswaran, Max George, and Jay McGuiness.

In 2013, as a joint venture with an American singer Ariana Grande, he released a single, ‘Almost Is Never Enough’. The following year, he signed a recording deal with the Global Entertainment and continued with the several stage performances.

It was 2015 March, when he debuted his solo music video for ‘More Than You’ll Ever Know’ on Vevo and then went on a first solo tour with in April 2015. On 5th July 2015, he released his first single ‘Kiss Me Quick’ on Vevo, that peaked at no. 14 on UK Singles Chart.

Like he made his name through the boy band, he became ‘the wanted’ amongst many teen fans, when he released his worldwide popular 2nd single ‘Over and Over Again’ in October 2015. Success followed him like a shadow that helped him to come up with his 3rd single ‘Give It Up’ in May 2016 and later released an official video for the song in April 2016.

Taking about this young hunk’s love life, he began romancing Dionne Bromfield during the summer of 2012 but the couple called off their relationship in early 2013.

Afterward, he began dating Ariana Grande but just after 4 months, the two split. Since then, he is reported to be single.

There have been rumors that Nathan has dedicated his single entitled ‘Don’t call me when I’m famous’ to his ex-girlfriend, whom he couldn’t forget. The song’s lyrics clearly indicates that still, he hasn’t overcome the heartache he got when his ex-girlfriend left him. Many have guessed the woman to be Ariana Grande but he hasn’t revealed the name.

American singer, Ariana Grande claimed on of the songs of her newly released album is dedicated to her ex-beau Nathan back in August 2014. She also claimed Nathan to be gay and he cheated on her with a boy. Grande broke that news after she was linked with her new love interest, Big Sean at that time.

Apparently, this is the reason for the end of their relationship, though Nathan hasn’t publicized any reason of his break-up with Grande.

Back in 2013 April, the former ‘The Wanted’ band member, has a surgery for a hemorrhaging vocal cord. He revealed his pain and other experiences on the first episode of ‘The Wanted Life’ on E!. He claimed, he wanted to have surgery after getting some problems on his throat and voice.

While many young girls dream to date this young and handsome guy, Nathan’s shirtless pictures have dropped the jaws of many.

Anyone can follow this popular pop artist in social media pages. Additionally, they can also get his biographic details on various sites around the web.