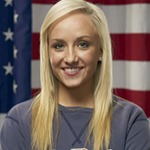 Nastia Liukin is a renowned young athletic personality. Nastia is a Russian-American retired gymnast player who has successfully gained name and fame in her young age.

She was born on October 30, 1989. Nastia Liukin was born in Moscow, Russian Federation. At the moment, Nastia is at the age of twenty-six. She is from an athletic family background. So, there is no doubt that she got influenced by her own parents.

Nastia was only two and a half years when the Liukin family moved from Russia to America. In May 2016, she graduated from New York University. In the beginning, when Nastia was small, her parents worked as coaches. They don’t have enough money so that they could afford a babysitter for their baby. So, they also used to take her at the gym, where she used to hang on gym bar.

At first her parents didn’t want to join gymnast. But, later, the devotion towards it of Nastia made change the decision of her parents. According to sources, Nastia became a gymnast at the age of three.

Nastia is not married yet. But, this graceful athletic persona is, recently, engaged with Matt Lombardi. Her boyfriend is also a former Boston College hockey player. Through Instagram, Nastia announced their engagement with Matt Lombardi.

Nastia Liukin is associated with AT&T, Visa, GK Elite Sportswear, Addidas, and Subway. She is active on social media sites Twitter and Instagram.