Meet Aly Raisman boyfriend: When did the couple started dating 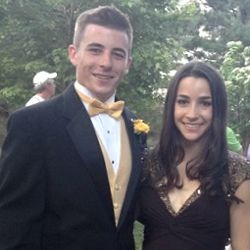 Aly Raisman, an American artistic gymnast who has won two gold medals in 2012 Summer Olympics, is currently dating Jamie McGill. Their romantic tale began while they were studying at Needham High School.

Nearly four years back, Jamie McGill asked Aly to go to a prom with him. That time, Aly was not attending school as she was busy training herself for Olympics.

It was the Christmas lights on a football field where he put a proposal of going to the prom with him. In a reply, Aly gave an answer with yes.

The prom night was organized at the Fairmont Copley Plaza located in Boston. They wore matching dresses on the prom. Aly picked gold corsage to match with her partner’s gold vest and tie.

Aly could not stay for a long time at the prom. She left the party very early as she was following strict instructions of her coach. Aly would have loved to stay at the party for a longer time only if she did not have to practice for the Summer Olympics which was on its way.

Since attending the prom night with Jamie, media started to speculate that the two were romantically linked up. At first, Aly clearly denied allegations but later the news of her love story with alleged boyfriend Jamie turned out to be true when both were captured attending The Weinstein Company’s 2013 Golden Globe Awards together.

As stated by Aly, she knew her Jamie since she was a little kid. They knew each other as both of them grew up together in Needham. Jamie used to play golf as the captain of Needham High’s golf team. He continued playing golf when he was studying at Saint Michael’s College too.

At the recent times, Aly and Jamie have not made any public appearances together which have raised a question among her fans if the two are together or not? Aly has not revealed any love life stories to the media so it is difficult to access her relationship status at the present time. Her fans may get to know more about Amy Raisman through her Twitter @Aly_Raisman.