5 Behind The Scenes facts about Mountain Monsters 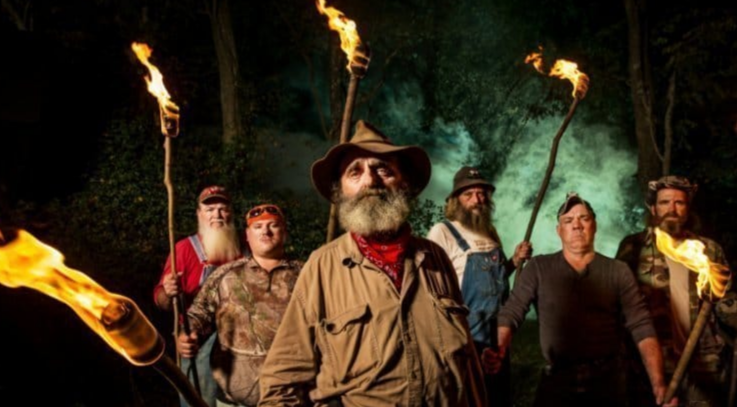 Werewolves, Mothman, Bigfoot, Devil Dog, Grassman and countless other mythical and mysterious monsters have been sighted in the 1500-mile long Appalachian mountain chain. Many witnesses tried to explain the mystery of these creatures, and some didn’t even try to avoid being laughed at.

So, Destination America signed a deal with a band of hardcore hunters and trappers native to West Virginia, known as The Appalachian Investigators of Mysterious Sightings (AIMS). They fight a tooth-and-nail battle to trap mysterious monsters daily to ensure that local mountain communities rest more easily when nature comes out of its natural form.

Mountain Monsters premiered in 2013 on Destination America, and it didn’t take that long for it to become a fan favorite. The AIMs team consists of Jeff Headlee, John Tice (Trapper), Willy McQuillian, Jacob Lowe, Joseph Lott, William Neff, and producer Colt Straub. The show has so far aired for five seasons. Though the fifth season finished airing in June 2017, there is still no news of a renewal. Some behind-the-scenes facts of the show have triggered the question that it’s fake.

All the members of the AIMS team are native to West Virginia, and in the first season, they tried to stay local, hunting monsters in their home state. Later, with the show’s growing popularity, producers decided to extend the perimeter and length of the seasons and instructed the team to investigate creatures from all over the South and Midwest states.

Later episodes of the show followed the team hunting in other states like Pennsylvania, North Carolina and Kentucky. However, they never left West Virginia. Regular followers of the show might remember seeing a text at the end of every video, “footage filmed in West Virginia.”

2. The Show is Scripted

Mountain Monsters has already completed five seasons, and fans eagerly wait for a new season. However, despite growing popularity, the show appears to be more and more scripted. Even though the cast members carry heavy guns, they never fire them. The hunters carry heavy guns but never use them.

They make way too much noise, which doesn’t make any sense, following the first hunting rule. The dramatic part is, the noise doesn’t scare off the animals. They find the creatures, which always seem to escape somehow before being trapped. They make too much noise, which doesn’t scare the animals. Additionally, the videos they capture are very computerized, and images are always made viewer-friendly.

Reality shows that were canceled way too soon

3. Two of AIMS Members May Be Actors

Seeing that Mountain Monsters wasn’t Jacob Lowe’s (Buck) first acting credit to his name. He had appeared in an independent documentary, A Murder in the Park, about the murder investigation of Anthony Porter in 2014.

Fans may have noticed a spike in encounters between the AIMS team and the monsters. People might think their skills are getting better, but it’s not.

Anyone who has watched the show has realized that it’s a big hoax. Over the years, they have become more and more unbelievable. For example, consider the episodes where Buck faces a Sasquatch, Huckleberry was possessed by a Mothman or when a Sheepsquatch urinated on Trapper. Monster encounters are faked using CGI masks in the dark and creative camera angles.

In the 12th episode of the show’s second season, the AIMS team head out to find a different type of creature and set their sights on “Legendary Hogzilla of Ohio.” At the end of the episode, they seemed to have placed a trap and caught the infamous Hogzilla. One of the episodes of season 2 featured the AIMS team capturing the infamous Hogzilla. They got the hog, and everything seemed fine.

Forged in Fire: 5 Facts you might not have known