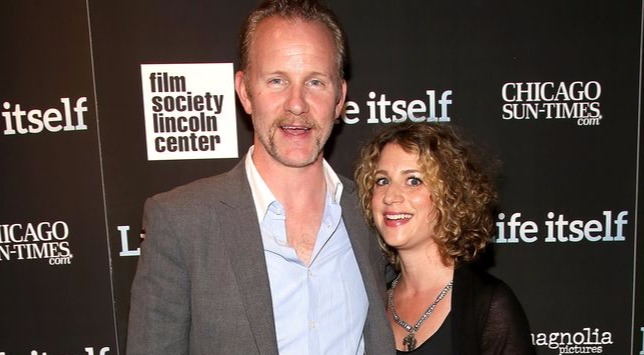 Morgan Spurlock, a filmmaker, and his newly married wife Sara Bernstein have welcomed their first baby. Already been through a divorce with his first wife, Spurlock shared the wedding vows with Sara while she was pregnant with their baby.

Documentary filmmaker Spurlock tied the knot with his girlfriend of a long time, Sara Bernstein, recently. The 45 years old director married his girlfriend of 8 years at the couple’s cabin in Catskill Mountains, Southeast New York in May 2016.

Morgan shared a glimpse of the blissful ceremony through his Twitter account @MorganSpurlock which featured his new wife showing off her growing baby bump in a short wedding dress. In the picture, Morgan was staring at the camera while the bride was adoringly gazing at him. Standing behind the couple was an old man with a shotgun which delivered the message of “shotgun wedding” as Morgan joked “it’s a shotgun wedding referred to as rushed nuptials due to pregnancy”.

The duo expected their baby to arrive in June but it arrived a few weeks earlier on 22 May. The baby boy was named Kallen Marcus Spurlock.

Although it was their first child together, it was the second time that Spurlock was experiencing fatherhood as he has a 9 years old son Laken James with his first wife.

Speaking of his past relationship, he and his former spouse Alex Jamieson married in 2006. They came together as a couple in 2004 after collaborating for Super Size Me.

Shortly after marriage, Morgan went for an Afganistan visit Osama Bin Laden to make a documentary on Osama Bin Laden, leaving his pregnant wife. Alex was worried about him but felt betrayed for leaving her alone in such condition.

Shortly after he returned, his son was born, following which Alex filed for a divorce which was finalized in 2011. They share joint custody of their son.

In the aftermath of divorce, Alex turned to be a vegan while battling against the stress of her broken marriage while Morgan took blame for their separation. Single-minded in his working approach, he didn’t even devote the same passion to the relationship.

Morgan’s work oriented attitude ended up breaking his first marriage with Alex. Let’s hope that he has learnt his part of the lesson and will not take his second wife Sara Bernstein for granted.