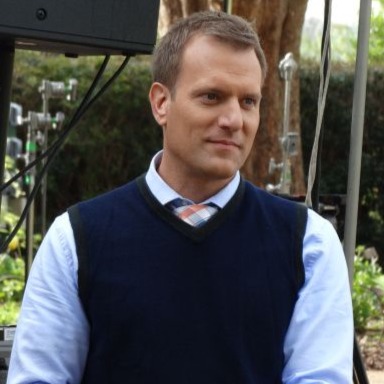 Mike Bettes is a television meteorologist and storm chaser who has been working for Atlanta, Georgia-based The Weather Channel (TWC) since 2003. He hosts a popular weather reporting program, Weather Underground TV. He also appears as a fill-in weather reporter on The Today Show occasionally.

How Old is Mike Bettes? Bio and More

Michael “Mike” Bettes was born on January 9, 1972, in Tallmadge, Ohio. And so, Mike holds an American nationality by his birth. Likewise, he comes from a white heritage. Moreover, as of 2022, Bettes recently turned fifty years old.

Despite thriving in the spotlight, Mike prefers to lead an elusive life. And so, the names of Bettes’ parents remain hidden from the public view. However, Mike, The Weather Channel meteorologist, grew up in his hometown with one sister.

Bettes reportedly receives a salary of nearly $70 thousand to $100 thousand annually, while his net worth is still under review. Mike Bettes holds an estimated net worth of $1 million as 2022.

After his graduation, Bettes began working at an ABC affiliate, WSYX, and a Fox affiliate, WTTE. He was a weekend meteorologist at both stations. Mike also worked as a weekend weather reporter at Dayton, Ohio-based television station WKEF before he moved on to WLOS in 1998.

Bettes served as the chief meteorologist at WLOS for around five years before joining TWC in 2003 as a field reporter. In 2006, he teamed up with Stephanie Abrams to co-host his first show on the channel, Abrams & Bettes: Beyond the Forecast. The show ran until 2009, following which Bettes began co-hosting Weather Center Live.

After his brief stint with Weather Center Live, he has been associated with various TWC programs such as Wake Up With Al, Your Weather Today, Morning Rush and America’s Morning Headquarters until 2015. Since then, he has been hosting Weather Underground TV.

Find out Stephanie Abrams’ salary and net worth.

Mike has also been working as a special reporter for NBC News since 2007. The long-term association with TWC and NBC News has helped him earn fame and huge net worth.

Twice-married Mike Bettes is a father to a baby boy

Mike Bettes married Allison Chinchar in October 2012. What’s more, Bettes and his wife, Alison, exchanged their vows in a private setting. Likewise, Mike and his spouse keep their dating history away from the public eye.

Mike, along with his wife and son Landen Benjamin, lives in Sandy Springs, Georgia. The couple is also raising a golden retriever pup, whom Mike often refers to as his next child.

According to the sources, Mike was previously married to his former co-host Stephanie Abrams. Their marriage ended in a divorce.