Skip to content
Home » Entertainment » 5 Interesting Facts about Mick Dodge, The Barefoot Nomad from The Legend of Mick Dodge 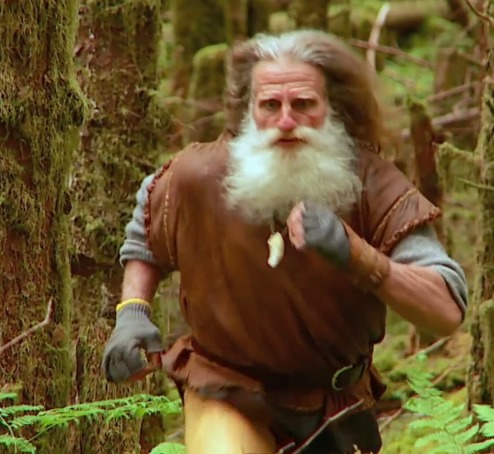 Mick Dodge, who has earned various nicknames like “Walking Mountain,” “Barefoot Nomad,” and “Barefoot Sensei,” is a mountain man who lives in the mountains of Olympic Peninsula in Western Washington. The forest wanderer, who left his modern life to live free in nature, became a TV personality when National Geographic documented his life in the reality show, The Legend of Mick Dodge. Mick has been living in the wild since 1991 and has developed all the necessary tactics required for survival.

In this era of technology, this man developed a particular interest in staying away from the materialistic world and surviving in the wild. So, today, we have chosen to present some amazing facts about him.

Can you try walking barefoot for a day, or at least imagine that? Admit it. Most of us can’t! While the hi-tech world greatly influences us, we can’t go back to the primitive life that our ancestors lived.

That instinct is what Mick Dodge developed distinctively from others and has earned pseudonyms like Barefoot Nomad and Barefoot Sensei for nearly three decades. He says, walking in the forest barefoot is the first thing you do if you want to connect with nature and the forest.

What happened to Mick Dodge? What is The Legend of Mick Dodge, a famed star doing now?

Walking barefoot has lots of health benefits as the particles on the earth’s surface can act as antioxidants to our body and help regulate our autonomic nervous system and body temperature. You might have noticed the tattoos of roots on his feet, marking his path in the forest. In one of the episodes of The Legend of Mick Dodge, he said that walking barefoot helped him cure his Plantar Fasciitis, back pain, and hammer toes.

Born in the early 50s in Olympic Peninsula, Washington, he grew up experiencing two worlds, the Hoh rainforest with his logger grandfather and the U.S. Marine base in Japan with his father, Ronald L. Dodge, who was a Marine.

He later went on serving five years as a Marine himself but didn’t stop experiencing nature. While living in Japan, he learned many things, which we can see in the show and was greatly influenced by the concept of “Yamabushi,” which means “to become one with the forest.” The Yamabushi is one of the myths from Japan, where hermits live in the forest to acquire supernatural powers. He discussed the topic several times in the show as well.

Apart from following different Japanese myths and legends, Mick knows quite a lot of ancient techniques helpful for surviving in the wild. From modern methods used in the military to the necessary survival skills used by warriors in the past, Mick has a lot of survival knowledge.

Mick doesn’t hesitate to share the knowledge with anyone interested in learning and believes that passing knowledge through books and words also helps in passing techniques. Well, not just his desire to stay connected with nature but also his survival knowledge has helped him in his journey.

He bakes his bread.

As a wanderer, Mick often travels through the forest and always prepares before he goes on his new journey. Preparing for a literary journey means collecting food and supplies, and the same applies to Mick.

He collects insect larvae and crickets as a protein source and even bakes his bread, following the baking techniques used by soldiers during the American civil war era. He puts flour and other supplies in a bowl, covers it with ashes and coals of a burning fire, and prepares the meal within an hour.

Even though he is surviving on his own in the wild, far away from the human settlement, he is still connected with the outer world. He is involved in community programs, passing knowledge about the benefits of connecting with nature. Besides, in 1994, Mick, alongside his friend Jacquie Chandler created a fitness program called Earth Gym.

In this gym, all the equipment necessary for working out is made from natural products. Earth Gym practice manifests the philosophy that “we train with the Earth until we become as the Earth.” The principles and practices he has developed and shared with the world in the form of Earth Gym make sense to all kinds of people, from runners and hikers to committed yogis and animal lovers.

What do you have to say about Mick Dodge’s choice to stay away from the modern world? Feel free to share your thoughts in the comments.