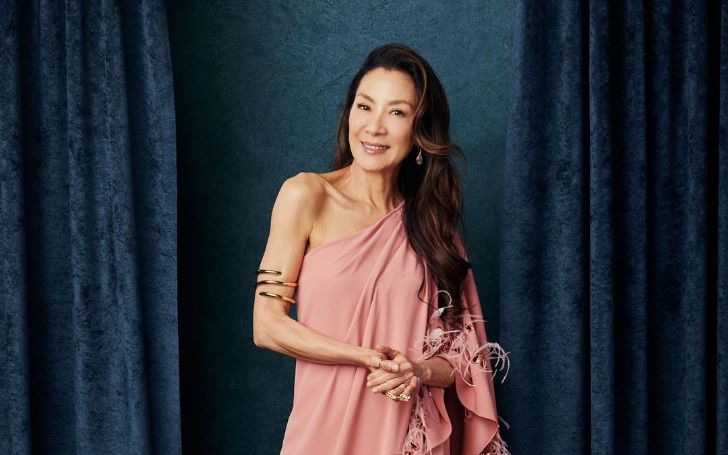 Michelle Yeoh is a Malasyan actress. She started her career by participating in beauty pageants. Yeoh then acted in several martial arts films where she did her stunts.

Yeon made her Hollywood debut in 1997 with Tomorrow Never Dies. She has appeared in movies such as Crazy Rich Asians and Shang-Chi and the Legend of the Ten Rings. Besides, Michelle appears as Evelyn Quan Wang in Everything Everywhere All At Once.

How old is Michelle Yeoh?

Michelle Yeoh is 59 years old. Moreover, Yeoh was born on August 6, 1962. Besides, the actress was born in Ipoh, Malaysia. And so, Michelle holds Malaysian nationality and comes from Asian ancestry.

Yeoh grew up as the only child of her parents. The beautiful actress moved around the world from a young age. Furthermore, Michelle began ballet at the age of four. However, a spinal injury later prevented the actress from becoming a professional ballet dancer.

When Yeoh turned fifteen, she moved to the UK along with her parents. And here, she would enroll in the Royal Academy of Dance in London. But, as we mentioned earlier, an injury did not allow her to pursue ballet.

After the tragic end of her ballet career, Michelle later received a BA degree in creative arts with a minor in drama. Moreover, Yeoh majored in choreography along with other arts.

Is Michelle Yeoh in a relationship?

Michelle Yeoh is engaged to Jean Todt. The pair met in June 2004 at a promotional event organized by Ferrari in Shanghai. Soon after, it was confirmed by the German paper Bild that Yeoh and Todt were dating.

Yeoh confirmed her engagement to Todt during an interview in July 2008. However, the actress has not spoken about when she plans to marry. In addition, Michelle has been married before.

Click here to know about James Hong and his relationships!

Michelle was married to Hong Kong entrepreneur Dickson Poon from 1988 to 1992. In addition, the actress was engaged to Alan Heldman in 1998. However, it is unclear why Yeoh’s past relationships ended.

Everything Everywhere All at Once star never welcomed a child with any of her partners. Moreover, Michelle always seemed more focused on propelling her career. What’s more, Yeoh became a patron of Save China’s Tigers, a project to protect endangered species in China.

As of 2022, Michelle Yeoh’s net worth is $40 million. Yeoh makes her primary income as an actress. Furthermore, she won the Miss Malaysia World contest in 1983 at 20.

Even with millions of dollars in her bank account, Yeoh keeps a low-key life. Moreover, much of Michelle’s assed remains hidden from the world. Moreover, the actress Michelle from Crazy Rich Asians earns millions per year. But, Yeoh’s actual salary remains a mystery for now.

After winning the pageant, Michelle appeared in a television commercial with Jackie Chan. The commercial caught the attention of a fledgling Hong Kong film production company, D&B Films. Since then, Yeoh started her film career acting in action and martial arts films.

Information on Michelle’s and her ex-husband’s divorce settlements is unclear. The couple didn’t have any children. Hence, Yeoh did not receive child support.

Michelle Yeoh came to the entertainment industry back in 1984. Moreover, she played the role of Miss Yeung in The Owl vs. Bumbo in her acting debut! Yeoh played in many cult classic Kung-Fu action movies.

Yeoh, then branched out to Hollywood movies in the late 90s. Furthermore, she appeared in Tomorrow Never Dies, a James Bond flick. Later she would go on to star in many action movies.

And in 2011, Michelle became the ambassador of Guerlain skincare products. Moreover, it fell on Yeoh’s shoulders to strengthen the French cosmetics in Asia.

Up until 2015, Yeoh kept herself exclusive to movies. Her first TV role came as Mei Foster on the fifth season of Strike Back. And the following year, Michelle found herself playing in one of the beloved sci-fi series. Yeoh played the Starfleet Captain Philippa Georgiou in Star Trek: Discovery.

Michelle’s career only gained new heights as the years rolled by. Her other major role came in the movie Crazy Rich Asians in 2018. After which, her role in Last Christmas was on November 8th, 2019.

Similarly, in 2021, she managed to land a role in the MCU movie Shang-Chi and the Legend of the Ten Rings. Furthermore, in 2022, the flick Everything Everywhere All at Once became the spotlight of her career. Moreover, many claimed that her role as Evelyn Wang was the greatest performance given by Michelle Yeoh!

Michelle has 921k followers on Instagram. Besides, the actress has more than one thousand posts on her social media. Yeoh shares a handful of personal pictures with her fans.

Yeoh usually posts to promote her movies. The actress also shares beautiful pictures of herself on the red carpet. In addition, Michelle also shares a handful of selfies with her fans.

Please Visit Us on E-celebrityfacts!