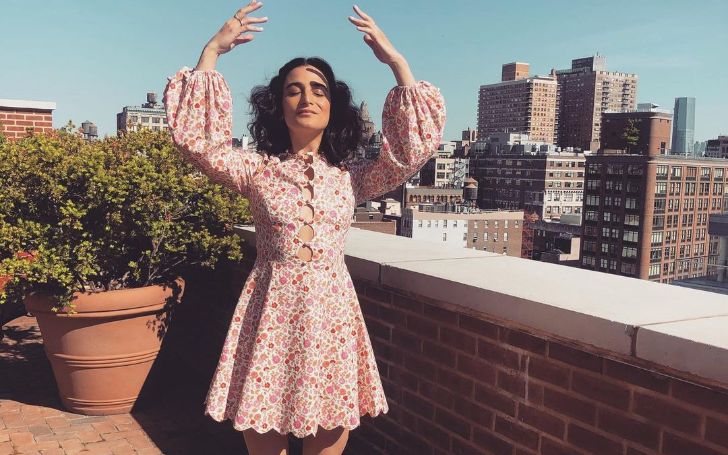 Jenny Slate came to fame as an actress in the mid-2000s. Furthermore, Slate’s first appearance was in the Starved TV show in 2005. Besides acting, Jenny also excels in voice acting. Fun fact, she appeared in 75 projects as a whole.

Slate also appeared in the movie Everything Everywhere All at Once. Although Jenny only played a minor role in the film, it gained massive success. The movie gained a 95% on Rotten Tomatoes and an 8.5 rating on IMDb.

How old is Jenny Slate? Age and Bio

As of 2022, Jenny Slate is forty years old. Likewise, Jenny was born as Jenny Sarah Slate on March 25, 1982. Further in her birth, her parents welcomed her in Milton, Massachusetts. Likewise, Slate holds an American nationality and comes from a Jewish family.

Speaking of family, the names of Jenny’s parents are Ron Slate and Nancy Slate, née Gilson. Her father, Ron, worked as the vice president of global communications for the EMC Corporation. And later, Mr. Slate became a CEO of a biotech startup. Moreover, her mom, Nancy, is a housewife, and she also made pottery.

What’s more, Slate grew up with two siblings. The actress/stand-up comic has an older sister named Abigail Slate and a younger sister named Stacey Slate. So, yes, Jenny is the middle child of her family.

Jenny Slate stands at a decent height. Moreover, Slate holds the height of five feet and four inches. Besides, Slate managed to keep herself fit even after recently giving birth to a child.

Due to the COVID-19 Pandemic, Jenny Slate and now husband Ben Shattuck canceled their wedding three times. However, there is a way when there’s a will; Jenny and Ben later exchanged their vows on New Year’s Eve, 2021.

Besides, the lovebirds, Slate and Shattuck, even welcomed a child in their marriage. Moreover, the actress stated on Jimmy Kimmel Live! that she and her husband welcomed a daughter, Ida Lupine Shattuck.

Jenny’s relationship with Ben isn’t her first marriage or a public relationship. Fun fact, Slate married once before. Moreover, she and her first husband, Dean Fleischer-Camp, exchanged their vows in September 2012. However, the marriage did not last as they separated in May 2016.

Did Michelle Yeoh marry a husband?

After which, Slate dated the MCU star Chris Evans for a short time. Sadly, the relationship didn’t bloom into something more. And by 2018, Jenny and Chris walked on a different path.

She told the world on Live TV about her Pregnancy and Child Birth!

When Jenny was pregnant with her first child Ida, Slate told the world on Late Night With Seth Meyers. Similarly, she stated that she and her boyfriend turned husband, Ben, was very excited.

Later on February 3rd, 2021, the talented actress appeared on Jimmy Kimmel Live! And she gave the news about the birth of her firstborn. Likewise, her daughter Ada was born in December of 2020.

How Rich is Jenny Slate? Net Worth and Salary

Well, as of 2022, Jenny Slate holds a massive fortune. Furthermore, Slate owns an estimated net worth of $6 million. Likewise, Jenny earned her wealth via different means in the entertainment industry.

Not only does Slate gain her salary from acting, but she also draws in her income as a comic, author and a former singer. And Jenny earns an approximated monthly salary of $80k or more. Likewise, she makes a roughly calculated $1 million per year.

Slate’s Career as a Comic

Before gaining fame as an actress, Jenny Slate started as a stand-up comedian. Moreover, she gained fame as a part of the comic duo Gabe & Jenny. Moreover, Jenny and Gabe Liedman managed to find huge success as comics during the late 2000s.

Liedman and Jenny met in 2000 at Columbia University. Furthermore, both Gabe and Slate remained very good first throughout the years. What’s more, the duo described their relationship as a non-sexual romance.

However, in 2015, Slate and Liedman walked away from their relationship. Furthermore, they stated they broke up the band due to their busy timetables. Thankfully, Gabe & Jenny still perform when they manage to make time.

Branching out to acting: Jenny Slate

In 2009, Jenny Slate started appearing on Late Night with Jimmy Fallon. Moreover, she mainly appeared in the recurring comedy sketch 7th Floor West. And soon after, Jenny landed a recurring role in the American adult comedy series Bored to Death.

Slate’s past as a comedian managed to gain her a spot on Saturday Night Live! However, she worked on the show for one season only. But, the opportunity smiled upon the talented actress, and Jenny found her big break in 2011. Slate managed land to role of Zoe in Alvin and the Chipmunks: Chipwrecked.

Aside from acting and stand-up, Jenny also dipped her toes in the voice acting world. What’s more, her biggest voice acting role was in Zootopia. Here, Slate voiced Dawn Bellwether, the main baddie of the movie! And later, she would voice Gidget on The Secret Life of Pets.

Now, the talented actress, Jenny, bagged multiple awards. What’s more, Slate holds even more nominations. And the names and moves which earned her these awards are below!