Everything to know about Michael Jackson’s son Blanket Jackson 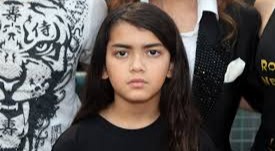 Blanket Jackson was born on February 21, 2002, in San Diego, CA as a surrogate child to Michael Jackson and Debbie Rowe.

His biological mother has not been revealed yet. His birth name is Prince Michael Jackson II.

Blanket is the youngest of his siblings, Paris-Michael Katherine Jackson and Michael Joseph “Prince” Jackson, Jr.

He was homeschooled when he lived in Neverland Ranch with his father, but after his death, he enrolled in a private school.

Michael Jackson explained about his son’s unusual nickname in an interview.

In 2015, Blanket Jackson changed his name to Bigi Jackson.

In 2002, Michael Jackson received outrage after he dangled 9-month-old Blanket over the edge of a balcony of Adlon Hotel in Berlin.

Blanket Jackson was seven years old when Michael Jackson died after which he went into depression for a while.

He was raised by his grandmother, Katherine Jackson away from the limelight and social media exposure.

Katherine who acted as Blanket’s guardian until now has appealed on giving up on it. She points her age of 87 as a reason she is stepping down.

Katherine has appointed TJ Jackson as his responsible guardian.