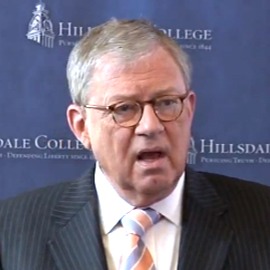 Michael Barone is a FOX News political analyst best known for being the principal co-author of The Almanac of American Politics. He is the author of many American politics and history books.

On November 11, 2008, Barone landed into a controversy when he trashed Alaska Governor Sarah Palin, the Republicans’ vice presidential nominee by saying she didn’t abort her Down syndrome baby. Baron later remarked his statement as a joke. He is now 71 years of age with an impressive bio-data.

Born in Highland Park, Michigan, he is the son of Alice Katherine Barone and Charles Gerald Barone who was an MD, a surgeon. His mother was of Irish descent and his father of Italian descent. While at Yale Law School, he was an editor of the Yale Law Journal. He has been conservative as an adult but worked as an intern for Jerome Cavanagh, the Democratic mayor of Detroit.

Michael was a supporter of George McGovern in 1972. Barone has said he is not a religious believer, although he is sympathetic to and respectful of socially conservative believers. Barone married Joan Shorenstein in 1975 but she died in 1985 at the age of 38 after a 10 year long battle with cancer. They had one child, a daughter named Sarah Barone, together.

He is a regular political commentator for the FOX News Channel since 2001. He frequently contributes Fox News Channel’s election coverage. He has been serving as a Senior Political Analyst for the Washington Examiner since 2009 where he writes a weekly column. You can follow him on [email protected]