Skip to content
Home » Entertainment » Where is Gold Rush cast Melody Tallis? What is she doing now?

Where is Gold Rush cast Melody Tallis? What is she doing now? 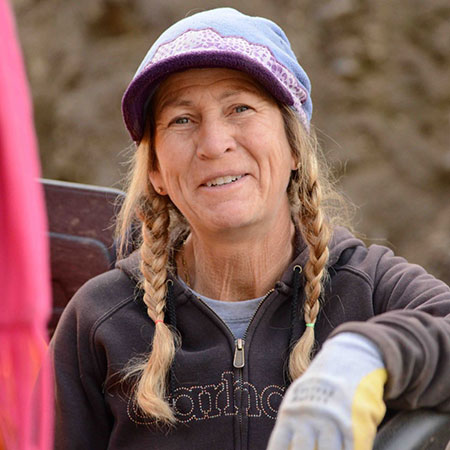 Melody Tallis is one of a few professional woman gold miner, who is known for her appearance in ‘Gold Rush.’

She was formerly in metal detecting with her husband, Arthur Tallis, before starting gold mining in 2002.

In 2008, while on vacation, she met Minnesota miner, Elmer Dahl, who was in the process of purchasing a gold claim in Alaska.

Dahl asked her to join him at the claim the following summer, and she has been into gold mining ever since.

While holidaying in Ganes Mining Camp, she found a nugget weighing 11.6 oz. (the largest nugget a woman has ever found there).

An avid viewer of ‘Gold Rush,’ she wanted to let the world know that woman play a large role in what is otherwise considered as men’s job.

She joined the show as a part of the Dakota Boys crew at Jim Nail Placer Mine on Porcupine Creek beginning on season 3.

After season 4, she, along with Dakota Fred and Dustin Hurt, left the show.

However, she was seen working on loaders monitoring in the background of shots covering Tony Beets.

She also worked with Freddy Dodge at Carmacks.

There were rumors that she and Jerry Rhodes started dating while they were working together.

Once Jerry said, “The best thing that came out of the dredge was meeting Melody.”

In February 2017, when she posted a picture of herself with Jerry and Mike Krisher, one fan asked her if they are still mining or not.

She replied to the fan that she is doing fine gold recovery, Jerry is doing drift mining and Mike is doing electronic mining.

Now, the three are working together at an Arizona based claim owned by Jerry and Mike.

Apart from her favorite hobby, i.e., gold mining, she loves to do woodwork, sew and fish.

These days, she is occasionally involved in woodworks, metal detecting, and others.