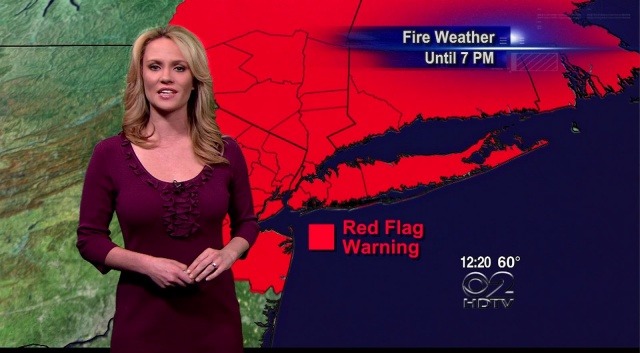 Previously Megan was weekend morning weather gal and an entertainment reporter at WCBS-TV and is now continuing the same role at WBBM-TV in Chicago, Illinois. She has as well served as a filled in anchor on ‘Good Morning America’.

Prior to joining WCBS-TV in 2008, Megan was the Local 10’s morning news weathercaster & had also host ‘SportsJam Live’ in South Florida. After working two years in WCBS-TV, she was hired by WBBM-TV to serve as their meteorologist for the channel’s early morning news. In addition to this, she has covered some serious stuff, like forecasting Hurricanes Rita, Wilma, Katrina and many others.

Ever since Megan became the part of weather forecasting, Megan has managed to woo her viewers’ hearts all over the globe. Megan’s contribution has paid off as she is enlisted among one of the determined meteorologists. Not to mention, she was awarded American Meteorological Society Seal in 2006.

In her time, she’s been an NFL cheerleader for NFL’s Indianapolis Colts for some months, a professional model during high-school and college and has been dancing professionally since she was six.

Megan Glaros, a well-known weather girl who knows a good deal about meteorology, studied at Texas Christian University and Indiana University.  Megan’s dedication and hard work have helped her to make a name for herself in this cut-throat industry. A renowned meteorologist at CBS-owned WBBTM-TV, Megan might be drawing a considerable amount of salary. However, the exact amount of her net worth and salary hasn’t made public yet.

All is well in Megan Glaros’s paradise! Happily married since 2003

Megan Glaros and Lance Bruggeman are living a blissful married life in their own paradise. Megan might be busy with her profession, but this doesn’t mean she can’t manage time for her loveable husband. In fact, Megan and Lance has a stable marriage since 2003.

Megan Glaros wedded Lance Bruggeman in 2003 in a very private ceremony. Her husband, Lance is an automation &  control engineer at ‘ACE Technologies’. Megan has raised three brilliant children with Lance. Around sometime in 2009, Megan shared her joy of being  pregnant with her first child. And in February 2010, she gave birth to an angelic daughter named Lana. Later their twins, a girl named Willow and a boy named Leo was born in June 2012. And the small family of Megan resides in St. John, Indiana.

Despite their busy schedule, the couple manages to step away from the limelight to focus on their children and relationship every once in a while. Besides, there has been no rumors of couple’s divorce. So, it’s safe to say that all is well in Megan and Lance’s paradise!

Megan Glaros has a bootylicious measurement

There is just not enough words to describe how sexy Megan Glaros is.  From her slim-line body to chubby cheek and natural brown eyes, this television personality and meteorologist has it all. Indiana princess Megan Glaros’s fine rounded figure has been gracing television screen for a long time now.

Megan has maintained sizzling measurements of 38-26-37 even at the age of 44. Megan appears to have an average height and has maintained a balancing weight with an hourglass body shape. She often flaunts her curvaceous figure in short body-hugging dresses.

Megan proudly owns a perfect body with naturally large breast, wider hips and slim waist. Her perfectly sculpted figure can give complex to anyone. One of the sexiest meteorologists, Megan has never talked about her workout routines and diet. However, it’s quite easy to guess that she definitely does some exercise to maintain her curves. Her dress size is 10 and is known to wear 34D bra size. She is yet to pose in a bikini but will certainly look hot in one without a question.

Light brown-eyed Megan Glaros may be the sexiest thing to have come out of  Indiana, this century. The entertainment reporter and meteorologist  Megan Glaros is another curvy analyst of climate-related news who is much admired for what she brings to the screen aesthetically.

Megan Glaros was born in 1972 and was raised in Dyer, Indiana. Megan is an American television journalist. To be more specific, she is an entertainment reporter and weather forecaster and is currently working for WBBM-TV.

A noteworthy and recognizable face in American journalism industry, meteorologist Megan Glaros has been gracing the screen since past few years. With her winning combination of glowing skin, a gracious smile, and journalistic cachet, Megan initiated her journalism career from  Parkersburg, West Virginal. Thereafter, she began her professional journey from Sinclair Broadcast Group in Baltimore, Maryland. There she  forecasted weather for nearly five different cities.