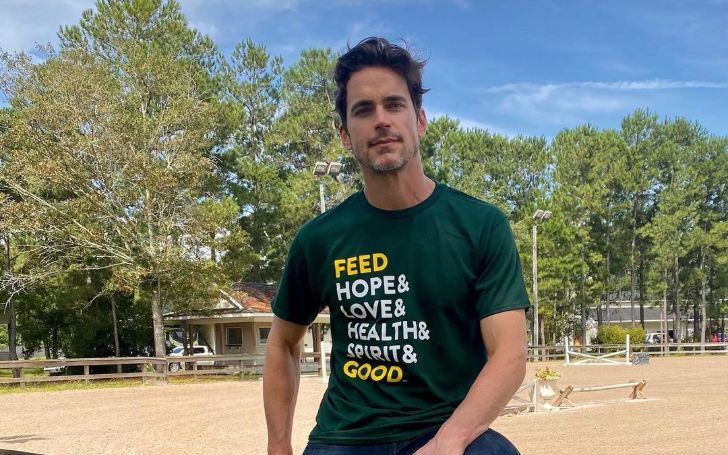 Matt Bomer is an American actor and television personality. He made his first appearance in 2000 and garnered widespread recognition after his recurring role in NBC’s series Chuck. And over the years, Matt appeared in many shows and movies alike!

Likewise, the American actor played leading and supporting roles in numerous movies and tv series from which he has earned fame. To know more about this talented actor, make sure to read the whole article. Learn his Bio, Age, Early Life, Education History, Body Measurements, Spouse, and Net Worth.

Matt Bomer was born Matthew Staton Bomer in Webster Groves, Missouri, The United States of America, on October 11, 1977. Bomer won the Critics’ Choice Television Awards in 2014 and the Golden Globe Award in 2015. Moreover, he was also nominated for the Primetime Emmy Awards in 2014.

Matt’s family members were one of his parents’ three children, John O’Neill Bomer (Father) and Elizabeth Macy (Mother). His brother’s name is Neil Bomer, who works as an engineer. Moreover, he has a sister named Megan Bomer. Furthermore, Matt, along with his sibling, grew up in Spring, Texas.

Bomer holds mixed descent (English, Welsh, Scottish, Irish, Swiss-German, and French). Similarly, he has an American nationality, and his sun sign is Libra.

Talking about education history, Matt went to Klein High School. While attending his high school, he was classmates with future actor and actress Lee Pace and Lynn Collins. After high school, Bomer graduated from “Carnegie Mellon University” with a degree in Fine Arts in 2001.

In terms of body measurements, the height of this talented actor is 5 feet 11 inches. In the same way, he weighs around 80 kgs. Moreover, Matt has dark brown colored hair and attractive blue eyes. Looking at his physical appearance, he looks fit and healthy.

The most awaited question of everyone must be about Matt Bomer’s relationship. Without further ado, let’s get into it. Well, Matt is a happily married man to Simon Halls. You might have been wondering about his sexuality. Yes, what you are thinking is right; Matt is gay.

Matt and Simon met in 2008 when Simon was hired as Matt’s publicist. However, they married later in 2011 but decided to keep their relationship a secret until 2014. The couple shared their vows in a small ceremony with a few friends, family, and relatives in New York City.

The duo has three sons, including twin brothers, Henry Halls and Walker Halls, born through surrogacy. As an astonishing fact, Simon already had a three-year-old son, Kit Halls, when they first met. Fun fact, all their three sons are named after Simon’s last name.

Before Simon, the actor was in a relationship with Mike White for three years. To be precise, they dated from the year 2003 to 2004. Nevertheless, they separated due to their issues and misunderstandings. That breakup was lucky for Matt, as he got a loving and caring life partner, Simon Halls.

What is the Net Worth of Matt Bomer?

The estimated net worth of Matt Bomer is around $9 million. This huge net worth was all collected through his acting as the main source of income. Moreover, according to authoritative sources, Bomer earns around $125k per episode.

Matt is one of the famous actors in the entertainment industry. He has inspired many in numbers through his devotion and dedication to his work. Not only that, Bomar has won several awards as well. Moreover, he bagged the Critics’ Choice Television Award, Giffoni Film Festival, GLSEN Awards, People Choice Awards, and many more.

On the other hand, the estimated net worth of Matt’s life partner is around $2.5 million. He earns a handsome sum from his firm “Huvane Baum Halls” and serves as a co-CEO. So, Matt and Simon, along with their kids, have a luxurious lifestyle.

Matt recently gained a massive spotlight for his role in Doom Patrol. However, his other recent parts in a hit Tv show propelled they talented actor further in his career. Which series would that be? Well, that would be American Horror Stories on Hulu! Bomer played the character of Michael in the said series.